French jets have carried out air strikes in Mali’s far north as they try to secure the final rebel stronghold of Kidal after a three-week offensive.

France’s President Francois Hollande has pledged to help rebuild Mali after the rebels who seized its north are beaten.

But there are fears the fighters could re-group in the mountains near Kidal.

It is believed that several French civilian hostages are being held by militants in the area, making the situation even more delicate.

French Foreign Minister Laurent Fabius told France Inter radio on Monday that the air strikes were aimed at “destroying the bases and depots” of the rebels.

He said: “They cannot stay there a long time unless they have new supplies.”

Although French troops captured Kidal’s airport on Wednesday, rebels from a Tuareg group who want their own homeland in northern Mali – the MNLA – still have control of the town itself.

Malian Interim President Dioncounda Traore has offered to hold talks with the MNLA in order to help secure Kidal.

At the same time, French-led forces will begin chasing down Islamist militants who have retreated to desert or mountainous hide-outs.

Tessalit is about 200 km (125 miles) north of Kidal and is a gateway to the Adrar des Ifoghas mountains, where rebels are believed to have sought refuge after being forced from the main population centres in the north and east of the country. 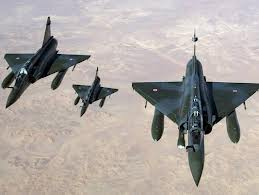 Reports have also emerged that a senior figure in the main militant Islamist movement – Ansar Dine – has been captured near the Algerian border by a rival separatist group.

Speaking in Bamako on Saturday, Francois Hollande pledged more French aid to its former colony and vowed to restore cultural sites damaged by the rebels.

Francois Hollande received a warm welcome on Saturday as he visited the northern desert city of Timbuktu, which was recaptured by French and Malian troops a week ago.

On Monday, Laurent Fabius said France intended to hand over control of Timbuktu to African forces as soon as possible.

He said a French withdrawal from the city “could take place very quickly, we are working on it”.

A total of 3,500 French troops are currently in Mali.

Nearly 2,000 army personnel from Chad and Niger are helping consolidate the recent gains. A further 6,000 troops will be deployed as part of the UN-backed African-led International Support Mission to Mali (Afisma).

Despite the rapid progress of French forces in recapturing parts of the north, it may be premature to talk of mission accomplished, analysts say.

It is thought the mountainous areas around Kidal provide perfect hiding places for the militants.