The image of a skull which it is thought could be that of Richard III has been released ahead of DNA test results.

Last year a University of Leicester team dug on the site of a church where it was believed the king was buried.

They found a skeleton with a badly curved spine and head injuries consistent with recorded details of Richard’s death in 1485.

Results of DNA tests on the bones are to be released at a press conference which got under way at 10:00 GMT.

Dr. Jo Appleby, from the University’s School of Archaeology and Ancient History, led the study of the skull.

He said: “The skull was in good condition, although fragile, and was able to give us detailed information about this individual. It has been CT scanned at high resolution in order to allow us to investigate interesting features in as much detail as possible.

“In order to determine whether this individual is Richard III we have built up a biological profile of its characteristics. We have also carefully examined the skeleton for traces of a violent death.”

Richard’s two-year reign signaled the end of the dynastic struggle known as the Wars of the Roses and is seen by some historians as the last act of the medieval era.

His death at Bosworth – the last English king to be killed in battle – ushered in the Tudor dynasty beginning with Henry VII. 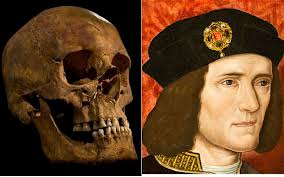 Shakespeare then helped to make Richard notorious as one of the English language’s most memorable villains.

While he remains for many historians the prime suspect in the death of his nephews – the Princes in the Tower – the skeleton’s discovery has provided a golden opportunity for those seeking to restore his reputation to put their case.

Dr. Phil Stone, chair of the Richard III Society, said: “This is an incredibly exciting time for anyone interested in Richard – it is simply the biggest news to hit Ricardian studies for 500 years.

“I really hope it is him. It is important, not just because it answers questions about what happened to his body but it gives us a chance to give him the solemn and respectful burial he deserves.

“And along with that it gives us an opportunity to show the wider public what Richard was really like and remind them Shakespeare’s play was fiction.”

In September, the university confirmed there was “strong evidence” a skeleton found beneath a council car park in the Greyfriars area of Leicester was the lost king.

The remains have been subjected to a battery of tests, including DNA, carbon dating and environmental analysis in an effort to confirm the identification.

The DNA tests are based on samples from a possible 17th generation descendant of Richard’s sister.

Who was Richard III?