Andre Cassagnes, the inventor of the classic toy Etch A Sketch, has died last month in Paris, at the age of 86.

Andre Cassagnes died in Paris on January 16, the Ohio Art Company, the US-based firm that made the toy, said.

He came up with the idea for a mechanical toy that creates erasable drawings by twisting two dials in the late 1950s, while working as an electrical technician.

Picked by the Ohio Art Company at a toy fair in 1959, Etch A Sketch went on to sell more than 100 million copies.

Etch A Sketch, with its familiar red-frame, grey screen and two white dials, allows children to draw something and shake it away to start again.

Andre Cassagnes saw the potential for the toy when he noticed, while working with metal powders, that marks in a coating of aluminium powder could be seen from the other side of a translucent plate. 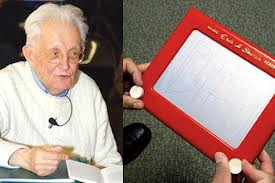 Andre Cassagnes, the inventor of the classic toy Etch A Sketch, has died last month in Paris, at the age of 86

The Ohio Art Company spotted the invention at the Nuremberg Toy Fair in 1959, and the next year it became the top-selling toy in the United States.

“Etch A Sketch has brought much success to the Ohio Art Company, and we will be eternally grateful to Andre for that,” the firm’s president Larry Killgallon said.

“His invention brought joy to so many over such a long period of time.”

The toy may seem old-fashioned in an age of tablet computers, but the Ohio Art Company says it still has a steady market, thanks in no small part to its appearance in the Toy Story movies.

And it became a feature of last year’s US presidential campaign, when an aide to Republican candidate Mitt Romney likened his campaign to the toy.

“You can kind of shake it up and restart all over again,” said campaign spokesman Eric Fehrnstrom, a comment seized upon by his rivals as evidence that Mitt Romney was willing to change his position to get elected.

Etch A Sketch has been named by the American Toy Industry Association as one of the most memorable toys of the 20th century.

As well as being the man behind Etch A Sketch, Andre Cassagnes also developed a reputation as the most successful designer of competition kites in France during the 1980s.