An Indian commission set up to suggest reforms to country’s rape laws after last month’s Delhi gang rape of a student has called for faster trials.

The panel, led by former chief justice JS Verma, also called for longer sentences but not the death penalty.

The brutal assault on the 23-year-old student in Delhi in December shocked India and sparked a debate about the treatment of women.

Justice JS Verma said his three-member commission had received 80,000 responses from India and abroad on how to reform rape laws.

Among the recommendations of the report, submitted to the home ministry on Wednesday, were:

The panel also recommended that those found guilty of rape leading to death spend the rest of their life in prison, but it stopped short of calling for the death penalty, something which many in India had pushed for.

“What is needed to enforce laws is the sensitivity on the part of those who implement it,” he told a news conference after submitting the report to the home ministry in Delhi.

“The state’s role is not just punishing criminals but also to prevent crimes against women,” he said. 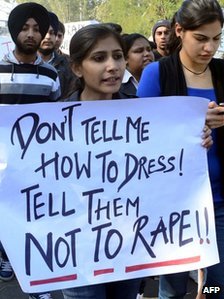 Justice JS Verma said the authorities had failed in their duties to the public.

He said that despite the huge number of responses to the commission’s request for ideas, not a single Indian state police chief had sent recommendations.

The head of the panel also praised young people for going into the streets to protest about the status quo.

“Youth has taught us what we, the older generation, were not aware of. I was struck by the peaceful manner in which the protests were carried out… the youth rose to the occasion,” he said.

“There is institutional bias against the weaker sections of society,” she said.

The Verma committee also looked at marital rapes and physical, sexual and psychological violence in the family.

Justice JS Verma said he hoped that the report would be taken seriously by the government.

The student raped in December, who cannot be named for legal reasons, was attacked after boarding a bus in south Delhi with a male friend.

Police said the assailants beat both of them, and then raped the woman. She suffered massive internal injuries and died nearly two weeks later.

The incident led to nationwide protests against the treatment of women in India. Campaigners called for tougher rape laws and reforms to the police, who have been accused of often failing to file charges against attackers.

Earlier this week, the trial of five men held for the crime began at a specially convened fast-track court.

If convicted, the men could face the death penalty. A sixth suspect, who is thought to be 17, is expected to be tried by a juvenile court.

The government has said it will bring in stronger sexual assault laws and has established several committees to recommend changes.

There are believed to be about 95,000 rape cases pending nationwide, according to Ranjana Kumari, a women’s activist.