Mariah Carey and Nicki Minaj have revealed that their cat fighting on American Idol isn’t an act – and their latest public snipe-fest is proof.

The judges of the hit singing show were at a press conference for the Television Critics Association Winter Tour on Tuesday morning and while things started out pleasantly enough with the two stars complementing each other, the atmosphere soon soured.

When asked if their sparring was real or merely a ploy to generate more buzz about the show, Mariah Carey, said: “It’s a passionate panel. The fight is what it is.”

According to the blog Vulture.com, a journalist then asked the warring women to say something nice about each other.

Nicki Minaj, 30, went first and said: “I say nice things about Mariah all the time. She is one of my favorite artists of all time.

“To be on a panel with her, it’s kind of crazy. All the singers come in aspiring to be Mariah, in terms of talent and in terms of career length.”

Mariah Carey apparently “flinched” before replying: “That was a very sweet thing to say.

“We did a song that was from my album and it was called, ironically, Up Out My Face. It was one of my favorite songs.”

Mariah Carey added: “And I did feel like she was going to go very far and still have that feeling. I am grateful for anything nice that she or anyone has to say.” 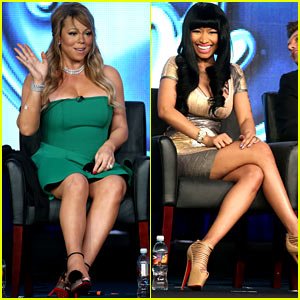 Mariah Carey and Nicki Minaj have revealed that their cat fighting on American Idol isn’t an act, and their latest public snipe-fest is proof

The stars both agreed that their fighting – most sensationally seen on leaked footage from an audition last October – “distracts” from the show so they decided to put in behind them.

However, it wasn’t long before the simmering animosity between the two resurfaced.

“It was sort of a one-sided thing,” Mariah Carey said.

“No, it wasn’t!” Nicki Minaj snapped back.

“See? They don’t want a rising star, they want drama.”

Throughout the rest of the press conference the pair rolled their eyes at each other’s comments, sneered or just stared daggers at each other.

Separated by the other judges, Keith Urban and Randy Jackson who tried to keep the peace, Nicki Minaj and Mariah Carey also seemed to be competing in the style and cleavage displaying stakes too.

Both were pouring out of their dresses – Mariah Carey opted for a strapless, emerald green mini dress with strappy Louboutins while Nicki Minaj wore a short gold, grey and white number.

The Make Me Proud singer also sported skyscraper Louboutins and both went for big, voluminous hair and fierce jewellery.

And to make things even more awkward, Mariah Carey and Nicki Minaj each said they neither of them would ever have entered a reality singing contest at the start of their careers.

Meanwhile, Kevin Bacon and James Purefoy shared a bromantic kiss during the TCA panel for their new show The Following.