Le Jardin, a Henri Matisse painting stolen in 1987 and valued at $1 million, has been found by an art recovery specialist in London.

Le Jardin (The Garden) was taken from the Museum of Modern Art in Stockholm during a robbery in the early hours of May 11, 1987.

According to reports at the time, attempts were made to sell it back to the museum for exorbitant sums.

The artwork is to be returned to the Swedish museum in the coming weeks.

The Art Loss Register, (ALR) a database of stolen, missing and looted artwork has been searching the market for the painting for the last 22 years.

A few weeks ago there was a search against its database from a fine art dealer in Essex, Charles Roberts.

He was carrying out due diligence, serving to confirm all material facts in regards to the sale, before handling the Matisse.

Once the match was confirmed, the recovery was handed to ALR director Christopher Marinello, who successfully negotiated the return of the painting.

“The ALR would not have been able to match and recover this painting without the steadfast dedication of ALR staff members, Malavika Baishya, Olivia Tate, and Pauline Geskes.” 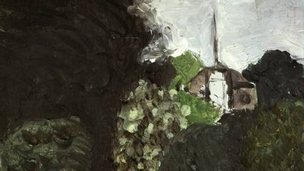 Le Jardin, a Henri Matisse painting stolen in 1987 and valued at $1 million, has been found by an art recovery specialist in London

Over the past seven years, Christopher Marinello, who is also a lawyer has been responsible for recovering or negotiating settlements in cases involving more than $245 million in stolen and looted artwork.

He said that Lars Nittive, the director of Stockholm’s Museum of Modern Art in 1987, was absolutely correct when he told reporters that the painting was too well known to sell on the open market.

“I commend the museum for not giving in to ransom demands a quarter century ago. Stolen artwork has no real value in the legitimate marketplace and will eventually resurface… it’s just a matter of waiting it out.”

Museum officials congratulated the ALR on the recovery of the work, which is expected to be returned to the museum through the Swedish Ministry of Culture in the coming weeks.