There will be a new parade route for 2012, but the Macy’s Thanksgiving Day Parade will still begin at 77th Street & Central Park West and end at Macy’s Herald Square.

• Columbus Circle: West side of street

• 34th Street: south side of street between Broadway & 7th Avenue 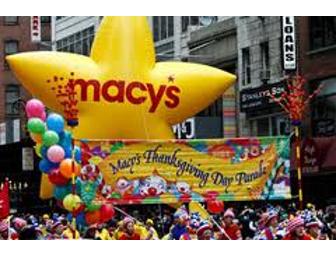 The 86th Annual Macy’s Thanksgiving Day Parade will begin on Thursday, November 22, 2012, at 9 am

In order to get a good viewing spot, many people arrive before 6:30 a.m. the morning of the parade to stake out space along the Macy’s Thanksgiving Day Parade route. Be sure to wear plenty of warm clothes and bring a thermos full of coffee or hot cocoa, as it can be quite cold. The duration of the parade depends on where you view it from – near the beginning of the route, it will last about 1 1/2 hours, closer to Macy’s, the parade will last closer to 3 hours. You can also book a hotel room with a view of the Thanksgiving Day Parade. For meeker, the parade will be aired on NBC from 9 a.m. until noon.

If you’d like to get a chance to see the balloons as they get blown up, on Wednesday, November 21, 2012 you can watch the inflation of the 25 parade balloons from 3 – 10 p.m. near the American Museum of Natural History just off Central Park West between 77th St. and 81st St.