According to a Gallup/USA Today poll of 12 swing states, Mitt Romney leads Barack Obama by 12 points among men, ahead of tonight’s second presidential debate.

But it is his surge among women voters to within one point of Barack Obama that has given him a four-point overall lead that sets him on course to win the White House on November 6th.

The poll, released on the eve of the second presidential debate in Hampstead, New York, marks an apparent end to months of double-digit Barack Obama leads over Mitt Romney among women and has plunged Democrats into panic mode.

Unlike the first debate, the second meeting will be in a “town hall” format in which undecided ordinary voters – probably about a dozen – will pose questions. At least half of them are likely to be women. In addition, the debate will be moderated by a woman – CNN’s Candy Crowley.

Democrats traditionally enjoy a marked advantage among women. Bill Clinton’s 1996 re-election was said to have been based on winning over middle class, aspirational so-called “soccer moms”. But Barack Obama’s popularity among females has plummeted after Mitt Romney’s commanding debate performance in Denver nearly two weeks ago.

Within an hour of the Gallup survey being released, the Obama campaign – which recently mocked Republicans for questioning poll methodology, went on the offensive against the 75-year-old polling firm. Reporters were sent a memo from Barack Obama pollster Joel Benenson.

In it, Joel Benenson said: “The latest Gallup/USA Today Battleground survey showing President Obama and Governor Romney tied with women in battleground states (48-48) is an extreme outlier, defying the trends seen in every other battleground and national poll.”

Overall, Mitt Romney has 50% of support among likely voters in the 12 battleground states, while Barack Obama is trailing with 46% support, according to the survey.

Without winning women, Barack Obama’s path to victory in November is complicated, if not impossible.

The memo includes a chart of selected surveys from a handful of battleground states that give Barack Obama a 10-point lead over Mitt Romney among women nationally.

“This implausible result among women appears to not even provide an accurate reflection on the electorate today, making its value questionable,” Joel Benenson insisted. 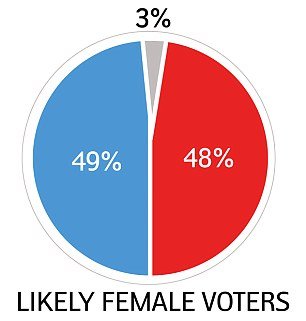 Mitt Romney is now neck and neck with Barack Obama among women voters, according to a new Gallup survey

Women tend to start paying close attention to election campaigns later and are more open to persuasion than men. This makes female voters, particularly the blue-collar “waitress moms” whose families have been hard-hit by the recession and unemployment, the most-prized group of swing voters in 2012.

Celinda Lake, a veteran Democratic pollster, told USA Today: “In every poll, we’ve seen a major surge among women in favorability for Romney” since the Denver debate.

“Women went into the debate actively disliking Romney, and they came out thinking he might understand their lives and might be able to get something done for them.”

She added that while Barack Obama currently maintains an edge among women voters, the changed views of Mitt Romney could be “a precursor to movement” in greater numbers towards the Republican nominee.

“It opens them up to take a second look, and that’s the danger for Obama.”

Democrats were scrambling Monday to maintain their historical edge among female voters. Party officials held a conference call in an effort to raise alarm over how a Republican administration would impact women’s lives negatively and the progressive group MoveOn.org released an ad starring three Hollywood actresses who claimed Republicans would try to end abortion rights for women.

The Romney campaign, on the other hand, touted the survey’s findings as proof that women are increasingly concerned about the economy instead of issues like birth control. Republicans said the survey shows women feel Mitt Romney is better equipped than Barack Obama to spur economic growth.

Mitt Romney’s path to winning a greater share of the female voting bloc has been long and arduous.

He trailed the president by 18 percentage points among female voters in a Gallup survey from April, around the time that Democrats were attacking Republicans for “waging a war on women” by supporting legislation that would limit insurance coverage for contraceptives.

That’s when Mitt Romney’s advisers decided to step up the visibility of his wife, Ann, on the campaign trail to try and make Romney more relatable as a husband and a father.

The campaign also organized “Women for Romney” grassroots groups in battleground states across the country and began cutting dozens of television ads that featured clips of Ann talking about Mitt Romney’s “softer” side.

The strategy has helped Mitt Romney slowly chip away at Barack Obama’s lead among female voters and after the president’s decidedly lackluster debate performance earlier this month, Romney appears to be finally closing the gender gap.

As Mitt Romney looks to maintain the progress he’s made among female voters, he’s likely to tread lightly on topics such as abortion and birth control during tonight’s debate – and to pivot back to the economy whenever possible.

President Barack Obama, on the other hand, will be looking for every opportunity to remind female voters of the measures he has enacted while in office that target women, such as the Lily Ledbetter Fair Pay Act.

Barack Obama will also be looking for every chance to remind women that that he was raised by a single mom and that he is the father of two daughters.

Unlike the first presidential debate, tonight’s debate will be in a “town hall” format, meaning candidates will answer questions from members of an audience, rather than a moderator.

There are 80 audience members total, which were selected by Gallup from a sample of undecided voters who live near the debate’s location in Hempstead on Long Island.

The participants had to submit their questions ahead of time. The debate moderator, CNN’s Candy Crowley, will decide who to call on during the debate based on her reviews of their submitted questions.

The candidates will have two minutes to respond to each question, after which the moderator can ask a follow-up question of her choosing.

The candidates will have one minute to respond to the moderator’s question.

The “town hall” format is designed to be more relaxed and conversational, with the candidates free to walk around the forum instead of remaining confined behind a podium or a desk.

But the format also lends itself to more opportunities for unplanned or candid events, such as the 1992 debate where President George Bush was caught on camera checking his watch.