Fang Daguo, a Chinese official accused of beating a flight attendant, has been suspended from his post pending an investigation, Chinese state media say.

Fang Daguo was described by Xinhua as a senior official from Yuexiu District in Guangdong province.

He was accused of attacking the stewardess in a row over luggage on a flight from Hefei to Guangzhou last week.

Fang Daguo was initially exonerated of blame in a local probe, creating an angry buzz among netizens and then state media.

The incident on Wednesday came to light after the attendant, employed by China Southern Airlines, reported it on her microblog.

Her account was retweeted more than 30,000 times, Shanghai Daily reported. Pictures of bruises, scratches and a rip in her uniform received during the alleged assault were also posted online.

Pictures of bruises, scratches and a rip in flight attendant’s uniform received during the alleged assault were posted online

On Friday a statement from the local government blamed Fang Daguo’s wife for the incident, but exonerated the official himself and said both parties had reached an agreement.

But netizens and then Xinhua news agency questioned the official account. 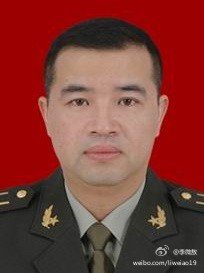 Xinhua ran a report on Saturday which largely confirmed the attendant’s account, quoting an eyewitness who was on the flight.

It said the altercation was triggered by an argument over where to place carry-on baggage, because the overhead luggage compartments were full.

In a report posted late on Monday, it said the couple “both smelt strongly of alcohol”, citing the eyewitness.

An editorial from the Global Times described conflicts between officials and the public as “increasingly problematic”.

“Public opinion is taking an unprecedentedly stern line on the restraining of power,” it said.

“This is why any official’s improper actions, whatever the circumstances, can boil over into a public event drawing nationwide attention.”

China’s internet users are increasingly vocal in their online criticism of officials perceived to have done wrong.

Last week, an investigation was launched into a safety official.

Images showed him grinning at the scene of a fatal road crash and outraged netizens then turned up several photos of him wearing a series of expensive watches.