Two people have been killed, including a gunman, and ten others are wounded in a shootout near New York’s Empire State Building, officials say.

The gunman was reportedly killed by police, and officials said ten others were wounded in the rush-hour incident in the heart of Manhattan. 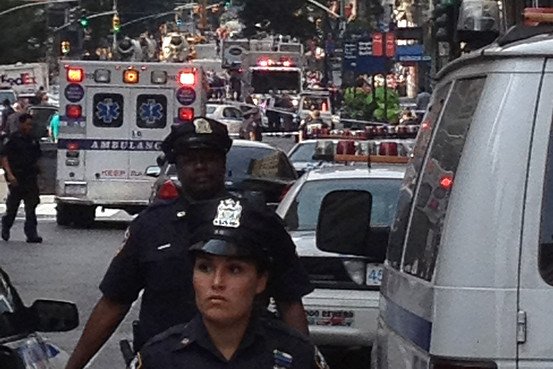 Two people have been killed, including a gunman, and ten others are wounded in a shootout near New York's Empire State Building

Some of those hit by bullets may have been accidentally hit by police, New York Mayor Michael Bloomberg said in a news conference.

But he said their injuries were not life-threatening and they were expected to make a full recovery.

Police Commissioner Ray Kelly said the suspect had been fired about a year ago from his job designing women’s accessories at a business in the skyscraper.

He said the “disgruntled” worker had been armed with a .45 calibre pistol, and he fatally shot a former colleague in the head.

The shooter was 53 years old and his victim was 41 years old, Commissioner Ray Kelly said.

There was a heavy police presence at the scene on 34th Street and Fifth Avenue, and the FBI also attended.

Federal officials said the shooting was not related to terrorism.

Fifth Avenue, a major traffic artery in the city, was closed from 42nd street.

Witnesses describe people running away from the scene of the shooting.

An eyewitness told the New York Daily News that the gunman had been wearing a business suit and carrying a briefcase.

She said a young woman standing next to her fell to the ground after being shot.

One of New York’s most popular tourist attractions, the Empire State Building is a 1,453-ft (442-metre) skyscraper, which attracts nearly four million visitors a year.

The tower also has offices and the area is bustling with workers on weekday mornings.