Mark Shriver, who is a prominent member of the Kennedy clan, has pulled the curtain on some family secrets in his new book about his father, Robert Sargent Shriver Jr., A Good Man.

“We all have a drinker in the family,” Mark Shriver quipped, referring to his clan’s checkered past.

“We all have the eccentric aunt, problems with drugs.”

Mark Shriver, 48, who is the senior vice president for the charity Save the Children met with about 50 friends and family at the Mid-Cape Democratic Campaign Headquarters in Hyannis, Massachusetts, on Wednesday for a book reading.

During the reading, Maria Shriver’s brother has revealed that “people in his family had always suspected” that President Richard Nixon leaked a story to the media that Mark Shriver’s older brother, Robert “Bobby” Shriver, and cousin Robert F. Kennedy Jr. had been arrested by police on Cape Cod on marijuana possession charges as teenagers. 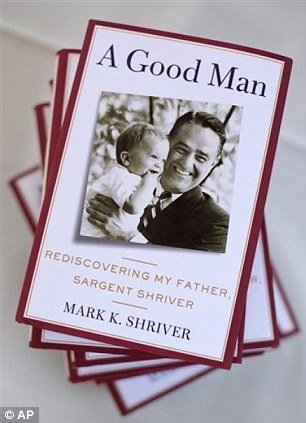 Mark Shriver has pulled the curtain on some Kennedy family secrets in his new book about his father, Robert Sargent Shriver Jr., A Good Man

According to a New York Post source who present at the literary gathering, the Democratic Party operator was very funny while regaling the small crowd with stories of his father and mother, Eunice Kennedy Shriver, the celebrated founder of the Special Olympics.

“One person in the audience told him he could be a comedian,” the unnamed attendee said.

Mark Shriver told his guests how in 1970, his brother and cousin, who were both 16 at the time, were busted on drug charges in Hyannis Port, which were dismissed after a year of probation.

However, that story ended up on the front page of every newspaper in the country, leading the Kennedy clan to believe that then-President Richard Nixon, a Republican, was behind the leak.

Years later, Sargent Shriver joked: “I always wanted to be private and anonymous. That’s why in 1972 I ran with George McGovern.”

Mark Shirver’s book paints an intimate and touching portrait of his special relationship with his father, who passed away in 2011 after a battle with Alzheimer’s, AARP blog reported.

Sargent “Sarge” Shriver is best known for launching the Peace Corps and being the architect of President Lyndon B. Johnson’s War on Poverty. Among the many jobs he had held during his 95 years, Sarge Shriver also spent two years serving as the U.S. ambassador to France.

In his private life, Sarge Shriver was widely regarded as a loving and tender father who would every night hand-write a note to each of his five children, telling they how proud he was of them, and calling each one “numero uno”.

The intimate book reading was attended by several Kennedys, among them Anthony Kennedy Shriver, who Mark Shriver joked “only came for the free food”.