Uganda’s President Yoweri Museveni has called on people to avoid physical contact, after the deadly Ebola virus spread to the capital, Kampala.

Fourteen people have died, including one in Kampala, since the outbreak began in western Uganda three weeks ago, he said in a special broadcast.

Ebola is one of the most virulent diseases in the world.

It is spread by close personal contact and kills up to 90% of those who become infected. 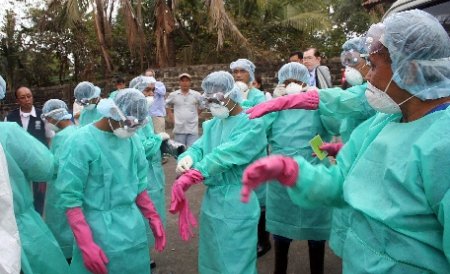 Uganda's President Yoweri Museveni has called on people to avoid physical contact, after the deadly Ebola virus spread to the capital, Kampala

Yoweri Museveni said health officials were trying to trace everyone who had had contact with victims so that they could be quarantined.

People should avoid shaking hands, kissing or having sex to prevent the disease from spreading, he added.

Yoweri Museveni said relatives and friends should not bury anyone who is suspected to have died of Ebola.

“Instead call health workers because they know how to do it,” he said.

Yoweri Museveni said seven doctors and 13 health workers at Mulago hospital – the main referral hospital in Kampala – are in quarantine after “at least one or two cases” were taken there.

One victim – a health worker who had been transferred to the capital – later died.

“I wish you good luck, and may God rest the souls of those who died in eternal peace,” Yoweri Museveni said as he ended his address to the nation.

The first victim of the latest outbreak was a pregnant woman in Kibaale district, about 170 km (100 miles) west of Kampala.

It then spread at a funeral, Yoweri Museveni said.

Uganda has seen three major outbreaks over the past 12 years.

The deadliest was in 2000 when 425 people were infected. More than half of them died.

There is no vaccine for the virus. Symptoms include sudden onset of fever, weakness, headache, vomiting and kidney problems.