Home Entertainment Lady Gaga tweets photo of herself as a newborn baby with her...

Lady Gaga took to Twitter to mourn the death of her godfather and shared a photo of herself in his arms as a newborn baby.

Buona notte is a nod to her Italian roots and translates as good night in English.

In the picture her godfather smiles widely as he carries her in his arms. 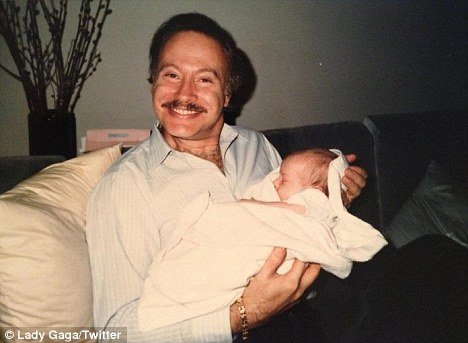 Although it is currently unknown what his name was.

It is the second time she has had to take to Twitter to mourn the death of a loved one.

At the end of 2010 Lady Gaga was left devastated when her beloved grandfather Giuseppe passed away.

He died at the age of 88 and she was pictured at his funeral as she paid her last respects.

She similarly paid tribute online, writing at the time: “Having a Perfect Manhattan, for my perfect guy. Love you Giuseppe.”

Lady Gaga also took to Twitter last night to share more photos of herself as she flew in a private jet with friends.

The singer pouted at the camera as she showed off her bare skin under a duvet with her teddy bear keeping her company.