Bulgarian authorities has released CCTV footage of the man suspected of carrying out the deadly suicide bombing of a bus carrying Israeli tourists at Burgas airport.

A white man with long hair and a backpack is seen walking around the terminal and leaving before the blast.

The Bulgarian authorities say the man – believed to be 36 years old – had a fake US driving licence.

The suspected bomber also died in the explosion in the eastern Bulgarian city by the Black Sea.

At least 30 people were injured, some seriously.

In response to Israel’s accusations, an Iranian foreign ministry spokesman said on Thursday that Tehran strongly condemned “all terrorist acts”. 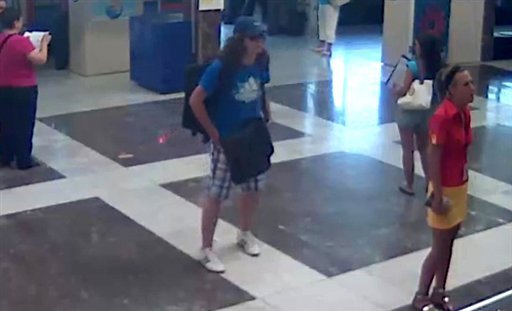 Hezbollah – a Shia militant group – has not publicly commented on the issue.

The attack could be part of a covert but violent war between Israel and Iran, and there is a view among some analysts that this attack could be a response to a series of recent attacks on Iranian nuclear scientists.

The Bulgarian authorities released the security camera footage of the suspect on Thursday.

Bulgarian Interior Minister Tsvetan Tsvetanov said the man is believed to have been in the country up to seven days before the attack.

“We cannot exclude the possibility that he had logistical support on Bulgarian territory,” Tsvetan Tsvetanov said, without providing further details.

The authorities are now trying to identify the man from DNA samples.

Benjamin Netanyahu said it was part of “a global campaign of terror carried out by Iran and Hezbollah”.

On Wednesday, the prime minister warned that “Israel will respond forcefully to Iranian terror”.

Passengers arriving on a charter flight from Tel Aviv boarded the bus at Burgas airport shortly after 17:00 local time on Wednesday.

“I was on the bus and we had just sat down when after a few seconds we heard a really loud explosion,” Gal Malka told Israel’s army radio.

“The whole bus went up in flames,” she said, adding that the explosion took place near the front of the bus.

Bulgarian journalist Dobromir Doskacharov, who arrived at the scene about 30 minutes after the blast, said: “I saw three buses completely burnt out – just the metal bars were left.”

“There were crowds of people around, very distressed. One man said he saw decapitated heads. Others spoke of body parts flying through the air,” Dobromir Dovkacharov said.

Israeli officials say the identification of the five Israeli victims has now been completed and they will be flown home later on Thursday.

Bulgaria is a popular tourist destination for Israelis.

However, in January there were reports that Israel had asked Bulgaria to tighten security for Israeli tourists travelling by bus.