US Secretary of State Hillary Clinton was targeted by protesters who threw tomatoes and their own shoes at her motorcade during a visit to Egypt on Sunday.

Hillary Clinton was on her first trip to Egypt since the election of the country’s new Islamist President, Mohammed Mursi.

During the protests in Alexandria, a tomato struck an Egyptian official in the face, and shoes and a water bottle landed near the armored cars carrying Hillary Clinton’s aides. 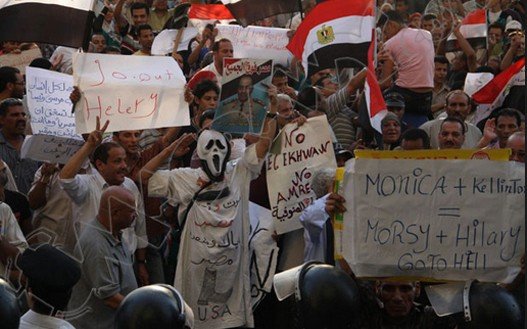 A senior State Department official said that neither Hillary Clinton nor her vehicle, which were around the corner from the incident, were struck by any of the projectiles.

As well as the shouts of “Monica”, some demonstrators chanted, “Leave, Clinton”.

The assault on her motorcade came on the day Hillary Clinton spoke at the newly re-opened U.S. consulate in Alexandria, addressing accusations that the U.S., which had long supported former president Hosni Mubarak, was meddling in Egyptian politics.

“I want to be clear that the United States is not in the business, in Egypt, of choosing winners and losers, even if we could, which of course we cannot,” Hillary Clinton said.