Egyptian parliament has briefly convened, despite the ruling military council ordering it to be dissolved.

President Mohammed Mursi had ordered the assembly to meet in defiance of the ruling.

Earlier, the council said the decision to dissolve parliament must be upheld. The military closed parliament last month after a supreme court ruling.

Its latest intervention is seen by some as a challenge and warning to Mohammed Mursi, who was sworn in only a week ago.

It could be the first confrontation between the military and the president since Mohammed Mursi’s election.

Speaker Saad al-Katatni said by holding the assembly, MPs were not contradicting the ruling, “but looking at a mechanism for the implementation of the ruling of the respected court. There is no other agenda today,” he added.

The MPs approved Saad al-Katatni’s proposal that the parliament seek legal advice from a high appeals court on how to implement the supreme court’s ruling. He then adjourned the session.

The demonstration that was due to be held in Tahrir Square in defiance of the military’s decision does not seem to have gone ahead. 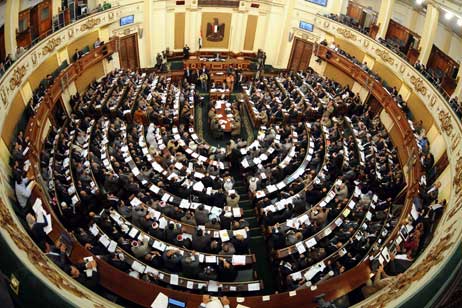 Egyptian parliament has briefly convened, despite the ruling military council ordering it to be dissolved

The Muslim Brotherhood – Mohammed Mursi’s power base, which has the biggest bloc of seats in parliament – had said it would participate on Tuesday “in a million-man march in support of the president’s decision and reinstating parliament”.

The military council said it was confident “all state institutions” would respect the law and constitution.

It is unclear how events will unfold as the situation – with the new president elected without a new constitution being drafted, and the parliament theoretically dissolved – is unprecedented, analysts say.

The statement from the Supreme Council of the Armed Forces (SCAF) will infuriate the Muslim Brotherhood.

Members of the Brotherhood believe it was the military that failed to respect the law by giving itself new powers after dissolving parliament last month.

Earlier on Monday, the Supreme Constitutional Court rejected the decree issued by Mohammed Mursi the day before to reconvene the Islamist-dominated parliament.

The court said its 14 June ruling – that the law governing Egypt’s first democratic elections in more than six decades was unconstitutional because party members were allowed to contest seats in the lower house reserved for independents – was binding and final.

As the court had not itself ordered the dissolution of parliament, Mohammed Mursi was not directly challenging a court order.

No mention was made of the court’s ruling in the decree. And presidential spokesman Yasir Ali argued Mohammed Mursi had been quite legitimate in suspending the dissolution until new parliamentary elections took place within 60 days of a new constitution being ratified.

Despite the apparent tensions, the president and Field Marshal Hussein Tantawi, who heads SCAF, appeared together at a military cadet graduation ceremony on Monday.

The president’s order has not, however, been welcomed by political rivals.

“Respect for the popular will by restoring the elected parliament and respect for the judiciary by holding parliamentary elections is the way out of this crisis,” he wrote on Twitter.

The constitutional court is due to hear a number of appeals against the decree on Tuesday, reports say.

Before Mohammed Mursi’s inauguration, the military granted itself sweeping powers.

The commanders’ constitutional declaration stripped the president of any authority over the military, gave military chiefs legislative powers, and the power to veto the new constitution, which has yet to be drafted.

Who holds the power in Egypt?

On paper, the president has authority over administrative and domestic affairs. He will appoint the cabinet – with the exception of the defense minister, which is reserved for the head of the SCAF. The president chairs the re-established National Defense Council, but the military has a majority.

The SCAF dissolved the lower house, the People’s Assembly, after the Supreme Constitutional Court found the election law unconstitutional. New elections will take place a month after the new constitution is approved, effectively suspending parliament until then. It is unclear whether the upper house, the Shura Council, is affected.

The court decides cases in which the constitutionality of a law or regulation is challenged. Its current president, Farouq Sultan, who is set to retire this summer, was appointed by Hosni Mubarak. His successor was selected by the court.