Russia has decided to have a day of mourning for the victims of the flash floods in southern Krasnodar region.

At least 171 people were killed in the disaster, officials said on Sunday.

President Vladimir Putin has ordered an enquiry into whether people were given enough warning of the disaster. A separate criminal investigation is under way into possible negligence.

Officials deny allegations blaming the ferocity of the floods on the opening of reservoir sluice gates.

The day of mourning and enquiry were called by Vladimir Putin after he toured the affected area in a helicopter on Saturday. 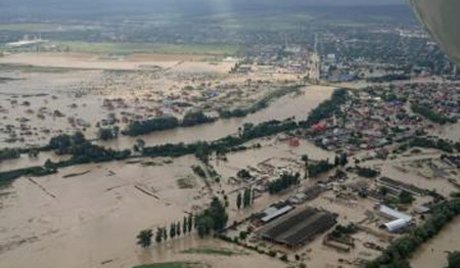 It was the first major disaster in Russia since Vladimir Putin, 59, returned for a third-term earlier this year, after a four-year term as prime minister.

The flash floods, the worst in living memory in the region, struck in the Krasnodar region on Friday night, after days of torrential rain. People were reportedly given little or no warning.

The rains dumped as much as 28 cm (11 inches) of water overnight, forcing many residents to take refuge in trees or on house roofs.

Most of those who died were in and around Krymsk, a town of 57,000 people. But deaths were also reported in the Black Sea resort of Gelendzhik and in the port town of Novorossiysk.

Krasnodar governor Alexander Tkachev said on Sunday that more than 24,000 people had been affected by the floods, according to Russian media reports. The regional authorities say more than 5,000 houses were inundated.

“It’s an unprecedented tragedy. There has been nothing like it in our history,” Alexander Tkachev said.

Local activists blamed the ferocity of the flood on the opening of sluice gates at the local reservoir.

The authorities admitted that an “automatic discharge” of water had taken place.

However, investigator Ivan Sengerov said on Sunday it was not thought that this was the main cause of the disaster in Krymsk, the Interfax news agency reports.

“The discharges were carried out in a normal, planned manner,” he told the agency.

“There was no overflow over the dam, so the discharges could not have caused the disaster.”

More than 7,000 Russian children were attending summer camps in the area and one of the camps was evacuated, Russian media reported.

Oil pipeline operator Transneft said it had halted crude shipments out of Novorossiysk – a major port on the Black Sea.

But the company added that that its infrastructure had been unaffected by the weather.