A rare caterpillar fungus, dubbed Indian Viagra, is starting to transform local economies in the Himalayas.

Some of those harvesting it are now having to arm themselves to protect what has become a valuable cash crop.

There is a fungus that attacks caterpillars in the Indian Himalayas. People in north India call it kira jari. In neighbouring Tibet it is known as yarsagumba. 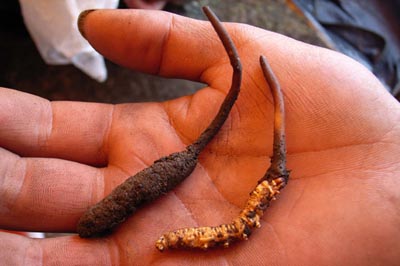 The fungus mummifies its prey and then grows out of the top of the dead caterpillar’s head. It appears above ground just as the snow melts in May or June.

In China, kira jari is used as an aphrodisiac. Athletes have used it as a performance-enhancing drug. For villagers in the Indian Himalayas it is a source of income.

During the last five years they have begun to collect the caterpillar fungus and sell it to local traders. These middlemen, in turn, sell the fungi to businesspeople in Delhi and it travels on from there to Nepal and China.

When sold in the village, a single fungus fetches 150 Indian rupees ($3) – more than the daily wage of a manual laborer.

Some people are able to collect 40 in a single day. So the search for caterpillar fungus has come to resemble a type of Himalayan gold rush.