According to Russian officials, at least 99 people have been killed after flash floods caused by torrential rain swept the southern Krasnodar region.

The floods, the worst there in living memory struck at night, reportedly without warning.

Emergency teams have been sent from Moscow by plane and helicopter. TV pictures showed people scrambling onto their rooftops to escape.

At least 88 people died around the worst-hit town of Krymsk.

Crude oil shipments from the Black Sea port of Novorossiysk have suspended.

Some users of social media networks in Russia said Krymsk looked liked it was hit “by a tsunami”. Others accused the authorities of not telling the whole truth about the disaster. 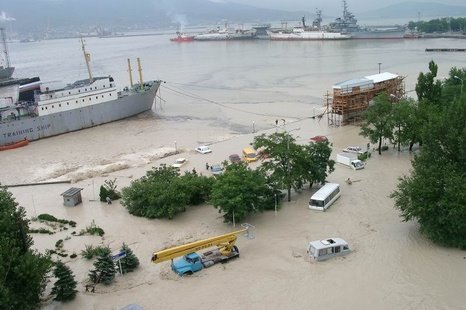 At least nine died in Gelendzhik and two in Novorossiysk. Dozens of people are reportedly missing, and there are fears that the death toll will rise further.

The Krasnodar-Novorossiysk motorway was cut, and the transport system in the region is said to have collapsed.

A statement by the Krasnodar regional administration said altogether 13,000 people had been affected by the floods.

Emergencies Minister Vladimir Puchkov is on his way to the region.

Up to 1,000 rescuers are involved in searching for victims and evacuating survivors.

“The floods were very strong. Even traffic lights were ripped out,” regional police spokesman Igor Zhelyabin told AFP news agency, adding that evacuations were under way.

Regional governor Alexander Tkachev tweeted after flying over the affected area that there was “something unimaginable” going on in Krymsk.

He said, quoted by the Russian Itar-Tass news agency, that “no-one can remember such floods in our history. There was nothing of the kind for the last 70 years”.

Anna Kovalevskaya, who says she has relatives in Krymsk, said her family was caught unaware by the floods.

“People were running out into the streets in their underwear and wrapping their children in blankets. People were only able to save their passports.

“There is no electricity and the shops are shut. Many people have lost everything and are in a state of panic.”

The rains dumped as much as 28 cm (11 inches) of water on parts of the Krasnodar region overnight, forcing many residents to take refuge in trees or on house roofs.

Oil pipeline operator Transneft said it had halted crude shipments out of Novorossiysk, but that its infrastructure in the port had been unaffected by the weather.

“Of course, we limited shipments, the port is located in the lower part of town, the whole landslide has moved towards it. As we speak, the rain has started again,” spokesman Vladimir Sidorov told Reuters news agency.