Alec Baldwin and Hilaria Thomas tied the knot in an opulent ceremony at one of New York’s most magnificent cathedrals.

The bride – who will now be known as Hilaria Baldwin – wore a silk magnolia trumpet Amsale gown with cap sleeves and a keyhole back neckline accented with crystal buttons.

The bridesmaids wore “eclectic miss-matched dresses, some in black, gray and turquoise, others in bold turquoise-and-purple tie-dyish prints”, according to E! online.

Alec Baldwin had a tuxedo by Tom Ford, People magazine has reported. 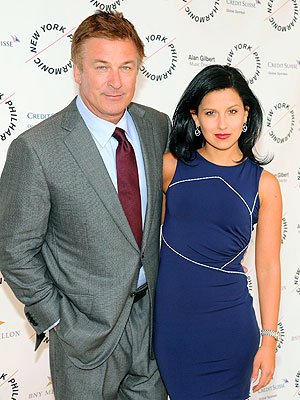 The Reverend George Deas is said to have performed the ceremony, reportedly conducted in English with readings in Spanish.

After the ceremony, guests were filtered to the campus of Hilaria’s alma mater, New York University, for a reception at the private school’s nearby Kimmel Center.

Earlier Hilaria tweeted: “Today is going to be a good day.”

According to E! Online the couple chose a white color scheme for the ceremony, highlighted in the selection of flowers that decorated the historic cathedral.

The entertainment website also reports that white ribbons were tied to the pews and a tent was set up near the back entrance of the church.

Alec Baldwin, who is 26 years Hilaria’s senior, asked for her hand in April in Long Island, New York.

The two dated for almost a year before he proposed and they first appeared in public together at several bashes in New York in May 2011.

Alec Baldwinwas previously married to Ireland’s mother, Kim Basinger, but the pair divorced in acrimony in 2002 after nine years of marriage.

She grew up between Boston and Spain, studying dance and history at NYU before becoming a yoga instructor.

The actor is apparently planning a very laid back summer with his new bride.

Taking to Twitter again before the ceremony, he revealed the couple could be off to Kingston, Idaho for their honeymoon.

Accompanied by a scenic picture of the Coeur D’ Alene River, Alec Baldwin wrote: “I can’t wait to stand on these rocks at Albert’s Landing and leave this world behind…. for the Summer.”