Kim Kardashian, 31, is the mirror image of the famous Kardashian matriarch Kris Jenner, 56.

The reality star wears a racy animal skin dress in one seductive set up and in another, wears a blazer, shirt and pussy-bow – which is one of Kris Jenner’s signature looks. 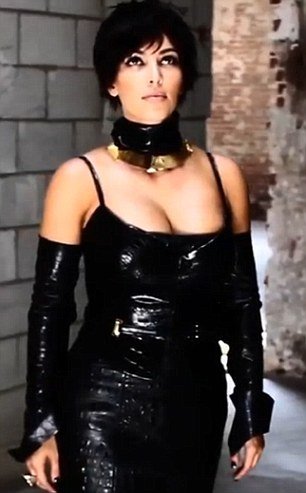 Other images show Kim Kardashian ever the glamour-queen, wrapped in a feathered gown and clutching an embossed blazer shut as she ducks through a fury of flashbulbs, oversized sunglasses shielding her eyes.

The shoot was filmed on the streets of Los Angeles in May by photographer Francesco Carrozzini and styled by contributing fashion editor Rushka Bergman.

Kanye West was also on the set, keeping an eye on proceedings from behind the scenes.