First picture of tragic Bee Gee Robin Gibb with his housekeeper Claire Yang, who had his love-child, Snow Robin, has emerged to media.

A Robin Gibb’s family friend, who was at his funeral, said the story of the singer’s relationship with Claire Yang: “Snow and her mother Claire weren’t at the funeral. They were the elephant in the room.

“Everyone talked about Robin and his children but carefully made no mention of Snow. Then Barry just went ahead and did it. He just came out with it quietly and naturally.

“When Barry said the child’s name, it was as if a bullet went right through the church. We couldn’t quite believe our ears.”

On the day of singer’s funeral, Snow Robin Gibb was 25 miles away in a smart detached house in Amersham, Buckinghamshire, with her mother Claire Yang. Now three, Snow Robin is an enchanting young girl, with pale brown hair and chocolate eyes.

Neighbors often hear her playing and laughing in the garden. Claire Yang, who had been the Gibbs’ housekeeper, refused to say why she chose not to attend the funeral with Snow, acknowledged as Robin Gibb’s daughter.

It appears that she was influenced by stories suggesting Robin Gibb’s widow Dwina would “hate” it if she turned up.

So what is the truth about Claire Yang, now 37, and her romance with Robin Gibb? And what will she do now that he has sadly passed away?

News of Robin Gibb and Claire Yang liaison emerged only in February 2009, three months after Snow Robin was born at the private Portland Hospital in West London. But they are thought to have been involved romantically for some years before that.

The picture of Robin Gibb and Claire Yang, side-by-side in the lobby of the exclusive five-star Westin Bellevue Hotel in Dresden, is the first photograph to emerge of them as a couple. It was taken by a fan in September 2004 when the star was in the middle of a German concert tour.

Robin Gibb’s comment after Snow Robin’s birth was charmingly enigmatic: “New life is heaven sent and a blessing. That’s what I can say about children and life.”

To the surprise of many, Robin and Dwina Gibb remained married, and Claire Yang moved out to a rented property nearby. In the early weeks he was a regular visitor. Robin Gibb explained towards the end of 2009 that his having had a mistress and a baby outside the marriage had been irrelevant to his family life with Dwina. 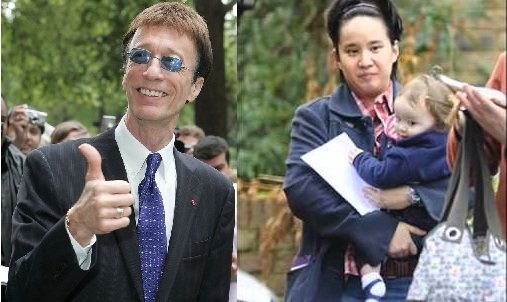 The picture of Robin Gibb and Claire Yang, side-by-side in the lobby of the exclusive five-star Westin Bellevue Hotel in Dresden in September 2004, is the first photograph to emerge of them as a couple.

“Our relationship is rock-solid and that’s the most important thing to me,” the singer said.

Friends of the Gibbs say that this must have been intensely painful for Claire Yang to hear, because she had been desperately in love with her employer for years. Indeed, according to one friend who spoke on the condition of anonymity, she had actually hoped that Robin Gibb would eventually leave Dwina for her.

Born in Braintree, Essex, in 1975, Claire Yang is the daughter of Dick, a computer systems engineer, and Evelyn, a one-time bank clerk. And although she was a baby herself when the band found fame, she is also, significantly, a big Bee Gees fan.

Robin Gibb’s friend says: “She was a fan who was taken on as paid staff. And from there, of course, it was a dream come true to have a relationship with Robin.”

Claire Yang, who started out as a housekeeper, worked both at the couple’s 12th-century mansion in Thame and at their waterfront spread in Miami, Florida. Records show that she lived in Miami for a time.

The friend says: “She was absolutely and desperately in love with Robin. The word I would use is obsessively in love. My view is she probably thought she would run off into the sunset with him, but that was never going to happen. Dwina would never give him up, and they loved each other.”

Claire Yang started working for Robin Gibb in 2001, and it has been claimed there was a romance from the early days, although it only became obvious rather later.

Certainly, by 2004, when the picture was taken, she was already travelling abroad with her employer, and for some years she continued to join him at corporate engagements or concerts.

Dwina Gibb, it appears, was well used to his flings. They had married in 1985 and, as a bisexual former Druid priestess, she was far from a conventional person.

Robin Gibb once revealed they had an “open marriage” and she confirmed: “We have an open relationship. Robin has had flings with friends of mine and he talks to me about them.”

Yet this was not just a fling. The friend says: “When he travelled in those years, Claire would come out and look after him completely, she was devoted to his every need. It would not have gone as far as it did if it was some kind of a casual fling.

“They were all living very closely in gated grounds. Robin spent quite a bit of time with her and things developed. There was a relationship, a full relationship, and I guess that they were happy together. I think that Dwina didn’t mind too much until there was a baby, too. That was the step too far.”

Dwina Gibb, 59, is said to have asked Claire Yang to leave after learning that she was pregnant by her husband. But she didn’t go far, renting a house only five miles away. In the early days, Robin Gibb paid for the rent on the houses she lived in, and for a nanny and a car, too.

One of the great showbusiness eccentrics, with his lavender glasses and obvious wigs, Robin Gibb was the kind of person who did business on the basis of a handshake, and it seems that this applied to his relationship with Claire Yang, too. There does not appear to have been any formal support agreement.

But Robin Gibb’s friend confirms the romance cooled after Snow Robin was born.

He says: “Robin talked about her a lot, but that was more before she got pregnant than afterwards. I think there was a general feeling that once the baby had arrived it was to be the start of a new chapter for everyone, including Claire.

“That’s not to say he didn’t think of her. I remember in 2010 he was in Australia and he got a big toy koala for Snow. For quite a long time he was absolutely seeing the child.

“It wasn’t mentioned to Dwina. I know that he used to talk to Barry about Snow and Claire. Barry was probably one of the few people he could talk to. From what I heard, Claire was unhappy. The one thing she never wanted to lose was Robin and when the baby arrived, she did lose him. She was isolated. It is quite sad.”

This much is confirmed by an old neighbor, who lived next to the house which she rented for a year when Snow Robin was very young.

The neighbor said: “I never once saw anyone other than her or the baby coming or going from that house. I never saw Robin Gibb. She really kept to herself.”

When Robin Gibb’s health failed last year, Claire Yang seems to naturally have wanted to formalize their arrangement. With the end of their romance, it must have occurred to her that it would be wise to secure her daughter’s future.

It was reported that around spring of last year, when Robin Gibb was diagnosed with liver cancer, it was decided that Claire Yang would need an official settlement for Snow Robin. And it was the process of settling a lump sum which seems to have resulted in a final schism between them.

Robin Gibb had given his word that Snow Robin would be treated equally, just like his other children.

He had promised to provide for her – but it was settling the details of how this should be done which caused trouble.

Robin Gibb’s long-standing friend said: “It became impossible for them. It then became really difficult between him and Claire. In the end, when his health was bad, he found it intolerable. It was just a mess.”

One problem was working out what Robin Gibb, who died aged 62, was actually worth – his fortune is estimated at £140 million ($225 million).

The process of formally totting up his assets was complicated and lengthy and tempers frayed.

“It was the process which took its toll,” the friend says.

“Dwina found it distressing when Robin was ill and Robin found it all too much as well.”

It took a full year to hammer out a deal – at a time when Robin Gibb was very frail. He suffered an inflamed colon and pneumonia over the winter of last year, and yet still the fight between their respective sets of lawyers dragged on.

In the end, Claire Yang is understood to have accepted a relatively small sum, £4 million ($6.5 million), for the future education and maintenance of their daughter.

In April this year, she bought a house in Amersham, Bucks, for around £800,000 ($1.25 million). Four weeks later, Robin Gibb died. Peter Jones, who sold her the property, said: “She was quite elusive. It wasn’t a completely normal sale. I think I only met her once.”

Now there is a fear in the family that things might get complicated if there isn’t provision in Robin Gibb’s will for her and Snow.

Robin Gibb’s friend says: “There was apparently an agreement, but not everything was settled.”

Dwina Gibb, in particular, fears that Claire Yang might come back into her life and wants nothing to do with any of it.

She let it be known that she didn’t want to see Claire Yang at the funeral, but some of Robin Gibb’s friends feel that this might have been a mistake, as Claire is understood to feel upset at having been excluded.

Could Claire Yang have any legal recourse? Robin Gibb’s lawyer, Michael Eaton, declines to comment on any details of Gibb and his bequests. However, under the Inheritance (Provision for Family and Dependants) Act 1975 in UK, any child is allowed to contest a will – or have it contested on their behalf – if they are excluded or if it is unfair.

Robin Gibb’s children from his first marriage – Spencer, 40, and Melissa, 37 – are thought to be included in it as, of course, is Robin John, 29, his beloved son by Dwina.