Home World Asia News Feng Jianmei injected with Lifannuo to abort her second child in the...

Grisly photos of Chinese young woman Feng Jianmei as she was lying beside her baby which had been aborted by force in her seventh month of pregnancy have caused outrage in China.

Pictures purporting to show Feng Jianmei and her blood-covered baby have shocked anti-abortion groups in China – and fury is spreading around the world.

The mother told local media that she was forceably injected with a chemical to induce an abortion and her child was stillborn 36 hours later.

Because Feng Jianmei already had a child, she said, local birth-control authorities ordered her to pay a fine of $6,500.

She didn’t have the money, she said, so a team from the local family planning authority in Shannxi province came to collect her from her home and take her to hospital for the forced abortion.

Recounting the horror, Feng Jianmei said she told the family planning department she could not pay the fine because her mother-in-law needed money for cancer treatment.

It was then, she claimed, the authorities began their action against her. 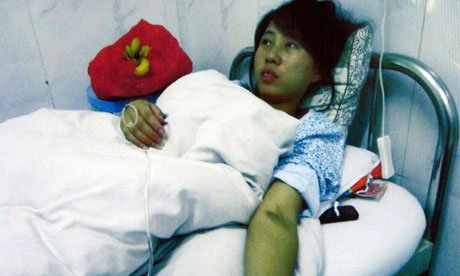 Because Feng Jianmei already had a child, she said, local birth-control authorities ordered her to pay a fine of $6,500

Feng Jianmei said no less than 20 staff from the family planning department came to her home and placed her under arrest.

As they drove her to the hospital for a forced abortion, she began to resist – resulting in her being beaten.

At the hospital she was restrained and given an injection that would be lethal to the foetus. None of her family was allowed to be present during the traumatic time, she said.

Feng Jianmei said that her father-in-law heard about her being taken away but when he rushed to the hospital he was prevented from entering the obstetrics ward.

As outrage spread around anti-abortion groups in China, the authorities strenuously denied Feng Jianmei’s version of the events.

Li Yuongjou, deputy chief of Ankang’s family department, said the reality was that “Feng was not forced to abort”.

He said: “A lot of us tried for days to educate her. She agreed to the abortion herself.”

Li Yuongjou added that in China an abortion is allowed up to 28 weeks, saying: “It’s not illegal to conduct <<medium term>> induction of labor.”

And he admitted, however, that in his town the local target of enforcing the one-child policy had not been achieved for two consecutive years and the authorities were acting more strenuously to see that the target covering 95% of the population was reached.

Local media said it was most likely that Feng Jianmei had been injected with a chemical commonly known as Lifannuo – a powerful bactericide used in the late 1980s and early 1990s when China’s one-child policy was strongly pursued by authorities.

It is not known how Feng Jianmei managed to obtain photos of herself beside the aborted child, but anti-abortion groups said they were convinced the pictures were genuine.