Charlize Theron has shaved off her pretty blonde locks.

Charlize Theron, 36, was spotted out in Beverly Hills yesterday with son Jackson.

And while the South African actress tried to hide her new look under a pork pie hat, the scale of the work done by her hairdresser was obvious to see around the back and sides.

It is believed she has had the dramatic cut for a new film role.

It was certainly a far cry from the luxurious golden locks she proudly showed off at the Alien prequel’s premiere just eleven days ago in sun kissed London. 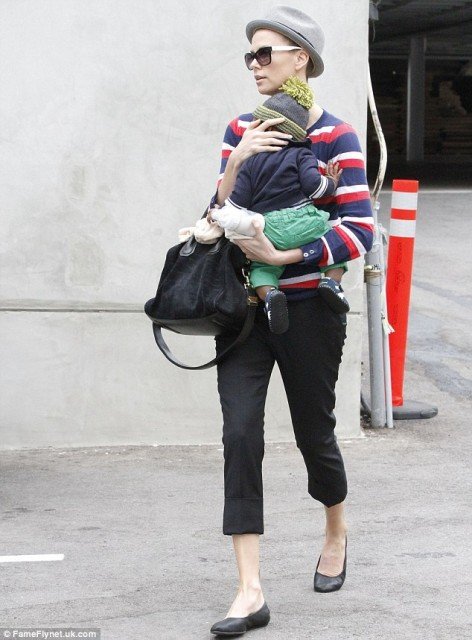 Charlize Theron has shaved off her pretty blonde locks

Some will question whether she had decided to follow in the footsteps of stars such as Sinead O’Conner and Natalie Portman.

Indeed, it could also be surmised that she had decided to pay a subtle tribute to fellow series star Sigourney Weaver, who shaved off her own locks when she reprised the role of Ripley in Alien 3.

However, her rep has confirmed the real reason for her transformation is for her role as Furiosa in Mad Max: Fury Road, the fourth film in the post apocalyptic series.

Charlize Theron said: “I feel like the original <<Mad Max>> created such a vivid world, that to go back and re-imagine it and kind of replay in that sandbox sounds like fun to me.

“George really created a female character that I’ve never read anything like this. I mean, I’m scared!