Spain’s economy minister Luis de Guindos has dampened speculation that the country is about to seek a bailout of its bank sector.

Luis de Guindos said no decision would be made until audits of the banks were completed, possibly by the end of June.

There have been reports in the past few days that Spain was seeking an immediate bailout from eurozone funds.

Luis de Guindos was speaking in Brussels, where plans have been published that aim to ensure that taxpayers do not have to fund future bailouts of banks.

An IMF audit of Spain’s banks is due next week, with further independent reports completed about two weeks after, Luis de Guindos said.

“I have absolutely not discussed any intervention in Spain’s banks today,” he told reporters on the sidelines of meetings in Brussels.

Asked if Spain was preparing a request for EU aid, Luis de Guindos said: “We are not preparing anything… we have a road map.”

With investors demanding higher returns to lend money to Spain, its finance minister said the credit markets were “effectively shut” to Spain, inflaming worries that the country would be forced to join Greece, Portugal and Ireland and seek outside help.

Spain has to find at least 80 billion Euros ($100 billion) to strengthen its banks’ capital buffers.

A key test will come on Thursday, with Spain due to auction up to 2 billion Euros of bonds. 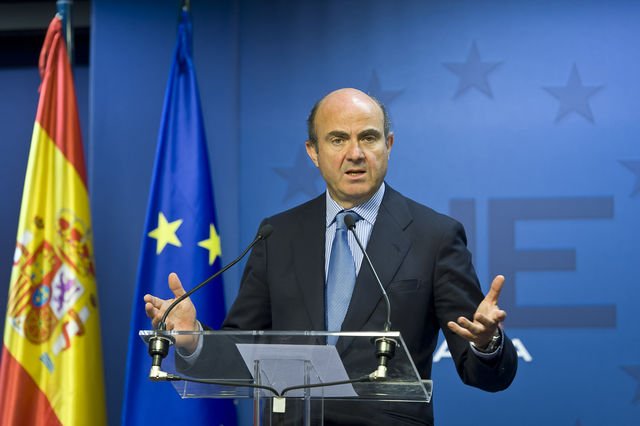 Spain is keen to avoid having to ask for a European Union bailout as this would come with strict conditions.

It is instead seeking funds which could be injected directly into the banking system.

Reports suggesting EU officials are looking at how this could happen contributed to a rally on European markets late in the afternoon.

UK Prime Minister David Cameron and US President Barack Obama kept up pressure on European leaders, calling for an “immediate plan” to restore confidence, after the two men spoken on the telephone last night.

David Cameron is due to meet German Chancellor Angela Merkel on Thursday to discuss the issues.

After the ECB left interest rates unchanged at 1% on Wednesday, Mario Draghi suggested that further monetary policy was not the answer.

The ECB has provided 1 trillion Euros for the banking system with two re-financing operations, or LTROs, designed to ease borrowing costs.

Despite signs that borrowing costs are once again rising sharply, Mario Draghi said: “The issue now is whether these LTROs would actually be effective. Some of these problems in the euro area have nothing to do with monetary policy… and I don’t think it would be right for monetary policy to fill other institutions’ lack of action.”

On Wednesday, the European Commission unveiled proposals designed to stop taxpayers’ money being used to bail out failed banks.

The aim is to ensure losses are borne by bank shareholders and creditors and minimize costs for taxpayers.

However, new legislation is unlikely to come into force before 2014 at the earliest, too late to protect taxpayers from any further immediate bank failures.

“The proposal we have today may be only useful for the future but it does not solve the current problems we face,” said Sharon Bowles, chair of the European Parliament’s economic and finance committee.

There would be new requirements for countries to prepare for a bank collapse, collecting money through an annual levy on banks that would be used to provide emergency loans or guarantees.

The European Commission plans involve drawing up a EU-wide framework that would allow:

• Countries to enforce the sale of all or a part of failed banks, overriding the rights of shareholders or creditors

The changes form part of commitments agreed by the leaders of the G20 group of major economies in September 2009.

Michel Barnier, the commissioner who unveiled the plans, said: “We must equip public authorities so that they can deal adequately with future bank crises. Otherwise citizens will once again be left to pay the bill, while the rescued banks continue as before knowing that they will be bailed out again.”

If it wins the backing of EU countries and the European Parliament, the law would mark a step in the direction of the banking union supported by European Central Bank president Mario Draghi.