Princess Maha Al-Sudairi of Saudi tried to dodge paying an $8 million bill from a five-star establishment in Paris, leaving the hotel with her retinue of 60 servants in tow and a mountain of suitcases.

She and her entourage were instantly spotted by staff when filing out of the exclusive Shangri-La hotel at 3:30 a.m. last Friday.

They called the police and the wayward ex-wife of Saudi Crown Prince and deputy prime minister Prince Nayef bin Abdulaziz – who is second-in-line to the Saudi throne – was stopped as her extensive luggage was being bundled into a fleet of limousines.

Most offenders in her position would have been arrested on the spot, charged and perhaps would already be behind bars.

But because the princess is protected by diplomatic immunity, police were unable to arrest or even charge her with an offence.

Instead the French authorities can only approach the Saudi Embassy in a bid to get them to help. 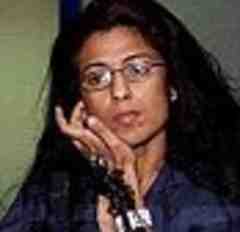 Princess Maha Al-Sudairi of Saudi tried to dodge paying an $8 million bill from a five-star establishment in Paris, leaving the hotel with her retinue of 60 servants in tow and a mountain of suitcases

In the meantime the princess and her small army of servants have been offered refuge from their troubles – at another luxury hotel, the Royal Monceau, near the Champs-Elysees.

The five-star hotel is owned by “family friend”, the Emir of Qatar, who has offered to put her up while the matter is resolved. Princess Maha Al-Sudairi arrived in Paris with her entourage on December 23 last year and booked out an entire 41-room floor of the Shangri-La.

Up until then Princess Maha Al-Sudairi had been confined to a palace in the middle eastern state by Saudi King Abdullah after leaving behind a trail of unpaid bills with luxury firms across Europe, reportedly including Dior, jewellery outlets Chaumet and Victoria Casal, and at least one hotel.

Matters finally came to a head last week when police found her and her servants attempting to leave the hotel. This is not the first time the royal has found herself in hot water.

Her global over-spending has been well-documented in the past.

Princess Maha Al-Sudairi was originally “cut off” by a furious King Abdullah after racking up massive debts all over the world during the last few years.

The following year, she was once again bailed out by her oil-rich government after she ordered $30,000 worth of glassware and silverware from a Paris store.

Despite this, her fabulously wealthy credentials meant the “IOU” notes handed to shopkeepers which read “payment to follow” were usually accepted.

Over the years, up to 30 of Paris’s most exclusive retailers have fallen foul of her bouncing credit notes, French newspapers reported.

Shop owner Jacky Giami, who owns Paris’s Key Largo leisure wear store, said the princess and her relatives had more than $160,000 worth of his stock.

Last night, police in Paris said they were unable to arrest or charge Princess Maha Al-Sudairi because she was claiming diplomatic immunity. They said they would be asking the Saudi embassy to help settle her accounts.