Pregnant Tori Spelling was spotted yesterday wearing a very daring monokini as she enjoyed a family BBQ in Los Angeles.

Tori Spelling, 39, who announced her fourth pregnancy in March, showed off her burgeoning belly in the black ensemble.

The swimsuit was held together by a stringy midsection, with the scant material barely able to save her blushes.

Tori Spelling was pictured with husband Dean McDermott, who went shirtless in a pair of shorts, and their youngest child, seven-month-old Hattie.

Hattie looked cute in a polka-dot swimsuit, complete with a floppy white hat to keep her shaded from the California sun. 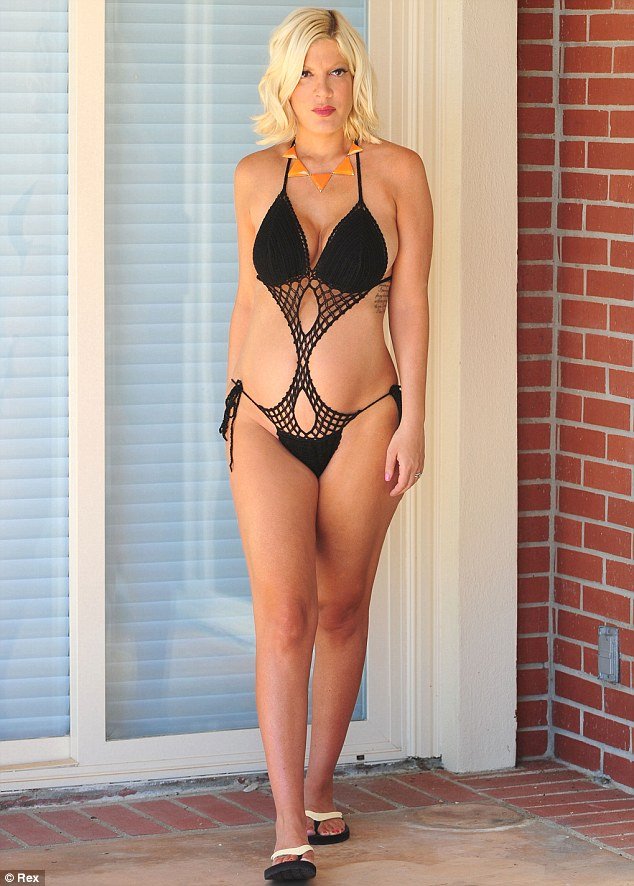 Mother and father were seen doting other their little daughter as they relaxed yesterday for the Memorial Day holiday in the U.S.

Dean McDermott and Tori Spelling also have two other children, five-year-old Liam and Stella, who turns four next month.

Tori Spelling became pregnant for the fourth time just a month after giving birth to Hattie – and Dean McDermott said in an interview at the time it is partly her fault that they ignored doctor’s orders and fell pregnant so soon after.

Dean Mcdermott told Celebuzz: “It’s so funny how everyone blames the man.

“It’s like, <<Oh my God, will you leave your wife alone?>> But it takes two to tango. She wasn’t putting up that much of a fight. But I have big shoulders. I’ll take it.”

Tori Spelling also revealed her latest pregnancy has been the easiest on her out of them all.

The actress said: “My pregnancy is going great. Knock on wood, this has been my best pregnancy. I’ve been feeling great. With the first three pregnancies, I was super sick all the time and nauseous.”

She added that her husband finds her sexy when she is pregnant.

“I’m never as happy as when I’m pregnant.

“And Dean can’t keep his hands off me! He’s like, <<You’re the sexiest pregnant woman>>.

“I literally would have 10 babies if I could!”