Kim Kardashian stunned when she showed up to the amfAR gala with a classic, Old Hollywood style look in a canary yellow gown to the Cinema Against AIDS event at the Hotel du Cap in Cannes.

But instead of finishing off her look behind closed doors to give the air of perfection, Kim Kardashian flossed and picked her nails as she retouched herself on a yacht.

Kim Kardashian, 31, was seen reapplying her foundation, fiddling with her nails and even flossing before she left for the public event.

And she obviously wanted to look her best as she played with her bracelet and kept on checking herself in the mirror.

But when she was finally ready she was the belle of the ball at the glitzy event. 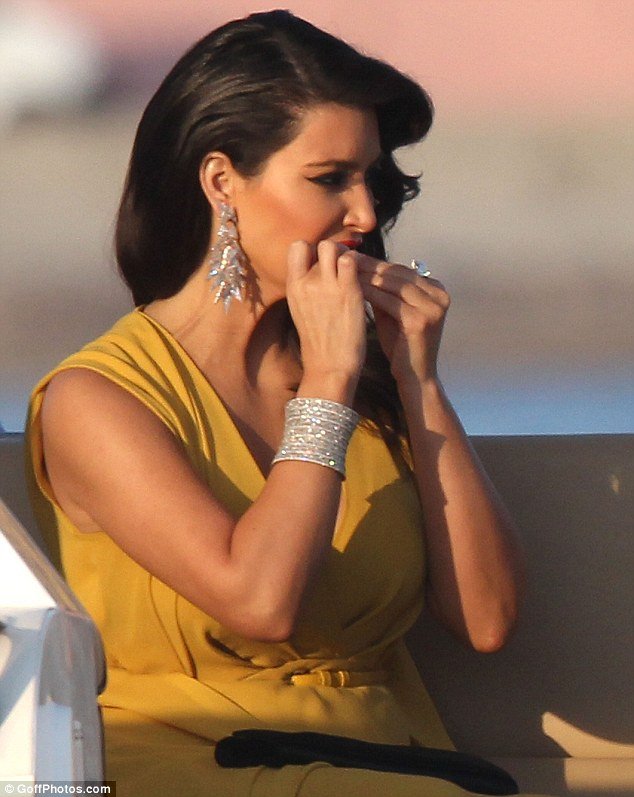 Kim Kardashian was seen reapplying her foundation, fiddling with her nails and even flossing before she left for amfAR Gala Cinema Against AIDS in Cannes

Kim Kardashian’s retro-inspired gown billowed in the breeze as she arrived at the star-studded gala in Cap D’Antibes.

While she certainly went for a more classic style, Kim Kardashian ensured there was still plenty of provocative skin on show with a daring slit up one leg and a plunging neckline that revealed her ample cleavage.

She continued her glamorous theme with Forties’ style curls and bright red lipstick.

Perhaps the reason behind her classic makeover was boyfriend Kanye West’s absence. The pair have been glued to each other sides during their stay in both London and Cannes but her was absent from the amfAR gala.

Kanye West even flew straight to Cannes from his last show at the London O2 arena, so eager he was to not miss a night with Kim Kardashian, after she flew out earlier in the day.

Inside the prestigious party, Kim Kardashian was pictured enjoying a laugh with her good friend Heidi Klum.

The ladies, who became friends after Kim Kardashian appeared on Project Runway last year, have been spotted gossiping at a number of showbiz parties this week in Cannes, and even enjoyed lunch together aboard a boat a few hours before the amfAR party.