Katy Perry and Russell Brand have never confirmed the reasons for the dissolution of their marriage in anything but the vaguest terms, but all that could change in the wake of a new film that will feature their doomed union.

Katy Perry, 27, opened up to Ellen DeGeneres on her show about her new film, Part of Me, and how she decided to show a realistic account of her life in the feature, including her relationship with Russell Brand.

The singer’s news comes just a week after Russell Brand, 36, told Ellen DeGeneres that he still loves his estranged wife.

Ellen DeGeneres asked Katy Perry about the 3D documentary, saying to her: “Of course, you got married during that time and that didn’t turn out to last, is part of it still in there?” 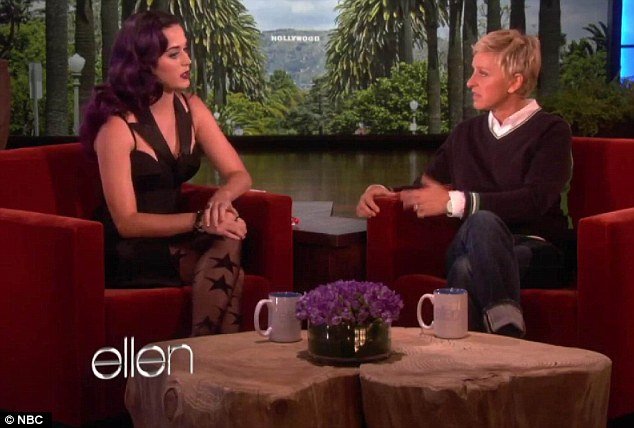 Katy Perry opened up to Ellen DeGeneres about her new film, Part of Me, and how she decided to show a realistic account of her life in the feature, including her relationship with Russell Brand

Katy Perry told Ellen: “I thought it was important to show everything in between.

“I think sometimes people think that we’re perfect and we know we’re not perfect, at all.”

“I think it’s important to start breaking down the idea that to achieve your dream you always have to be perfect or flawless or live in some kind of fantasy world. So that’s why I decided to put everything into the film,” Katy Perry said.

“In the most tasteful way. But mostly it’s about how I go there and the ride along the way which can be bumpy but mostly it was extremely fun.”

Some reports suggested that Katy Perry had cut Russell Brand from the footage, but this interview finally lays those rumors to rest.

The couple have been granted go ahead for a divorce but it will not be finalized until July, because California law requires a waiting period of six months.

They split just two months after their first wedding anniversary.

Katy Perry was said to have been “blindsided” when Russell Brand filed for divorce just after Christmas.

The move came after the pair enjoyed separate holidays over the festivities, Katy Perry in Hawaii and Russell Brand in his native England.

They have both moved on, Russell Brand has been linked to Brazilian artist Oriela Medallin and David Hasselhoff’s ex Anouska De Georgiou, while Katy Perry has had flings with Baptiste Giabiconi and Florence the Machine guitarist Robert Ackroyd.