The first pictures have been released showing the inside of Antilia, which is believed to be the world’s most expensive house.

Named Antilia, after a mythical island, it cost more than $1 billion, reports say.

Those who have visited it speak of helipads, a vast library, extravagant dining areas, opulent marble floors and even a snow room. Until now the family has remained silent on the residence.

“This is the first time I am talking about my home,” says Mukesh Ambani’s wife, Nita, in an interview published in the June issue of Vanity Fair magazine.

“There have been exaggerated reports in the media about it, I must say,” she adds. 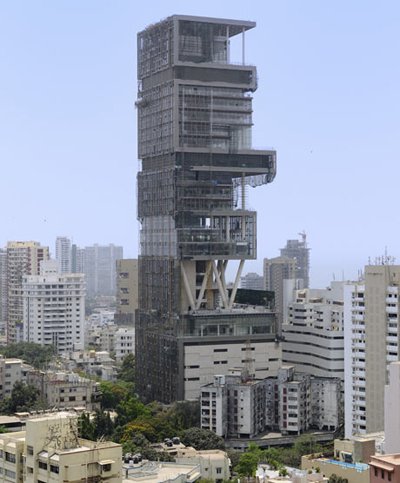 Much of the media speculation has centred on whether the family was actually living in the property.

Some newspaper reports suggested they had decided not to move in because the vastu shastra (an Indian form of architecture, akin to feng shui) on the building was not spiritually correct.

In the interview, conducted in November, Nita Ambani confirms they took up residence last September.

“We moved in two months ago… and then it was going round that we haven’t moved in,” she told reporter James Reginato, who gained unprecedented access inside the building.

A photo published of one of the rooms shows floor-to-ceiling windows, and a seating arrangement which resembles a five-star hotel lobby.

“It’s a modern home with an Indian heart,” says Nita Ambani of her house.

Antilia is 27 storeys high, but as Mukesh Reginato writes, many of the floors are double or triple height, so the building rises to 570 feet, equivalent to a 40-storey building.

It also has a mutli-storey garage, a ballroom, a spa, a theatre, guest suites and a number of terraced gardens, he writes.

“We made our home right at the top because we wanted the sunlight… so it’s an elevated house on top of a garden,” said Nita Ambani.

The design, she says, is based on the lotus and the sun, and is decorated using rare wood, marble, mother-of-pearl and crystal, crafted by Indian artisans.

As with many Indian households, it also has a Hindu prayer room, “getting my temple right was so important,” she said.

But despite this, the house’s construction has attracted some criticism from some who say it is far too grand for a city like Mumbai, where millions of people live in slums, and hundreds of thousands don’t have a roof over their head.