The latest cover of Time magazine has caused outrage after Jamie Lynne Grumet, a 26-year-old mother from Los Angeles, has been pictured breastfeeding her 4-year-old son.

Under the headline Are you mom enough?, the young woman is pictured having her left breast suckled by a boy who appears way beyond usual breastfeeding age.

Jamie Lynne Grumet has said she will not stop breastfeeding her almost-four-year-old until he turns five.

She said on the Today show: “I’m hoping our fourth year is probably going to be our final.”

Jamie Lynne Grumet, a mother of two, who also breastfeeds her adopted five-year-old son named Samuel, appeared on the breakfast program with her son Aram.

As the youngster fidgeted in her lap, Jamie Lynne Grumet acknowledged that her attachment parenting methods have been deemed offensive by others.

“I understand some of the breastfeeding advocates are actually upset about this,” she said.

She attributed such outrage to the actual cover image. It is what she believes is a one-sided portrayal of attachment parenting.

“This isn’t how we breastfeed at home,” she said in regards to the photograph, which captures the child standing on a small chair in order to take hold of her breast in his mouth.

“It’s more of a cradling, nurturing situation [at home]. I understand what they’re [the advocates] saying,” she said. 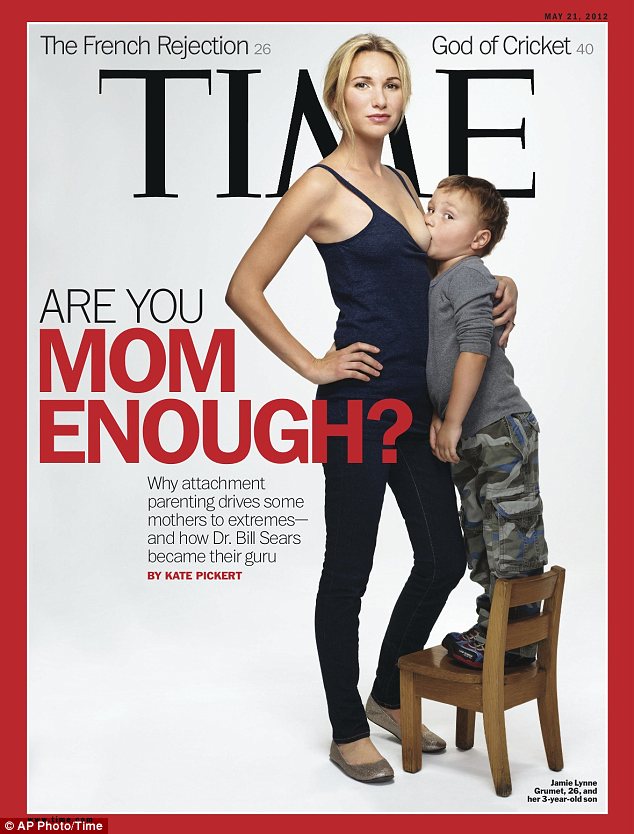 Jamie Lynne Grumet, who said Aram is in fact “self-weaning right now”, admitted that she “did understand” that the cover shoot was intended to spark controversy.

“We knew exactly what we were going to get into,” she said.

“I felt like our family was one of the better ones to handle this because of my mom’s own personal breastfeeding.”

Jamie Lynne Grumet was breastfed by her own mother until the age of six.

“It did create a media craze and [it was meant] to get the dialogue… talking,” she said.

But she stressed that she does not believe attachment parenting methods should necessarily be adopted by all mothers.

“It’s not right for everybody… you have to do what is right for your baby.”

He maintained that extended breastfeeding, a term that is commonly used to describe the act of breastfeeding past the age of two, is extremely natural.

“If you were on an island and had no doctors, no experts… this is what you would do naturally,” he said.

Jamie Lynne Grumet said that while she bares close bonds with her two children, her relationship with her husband is just as important.

“I don’t feel like it takes away from my own personal life, my relationship with my husband is very, very important to me,” she said.

In the magazine’s larger feature story about attachment parenting, the mother said that she is able to recall memories of being latched onto her own mother’s breast.

She said: “It’s really warm. It’s like embracing your mother, like a hug. You feel comforted, nurtured and really, really loved. I had so much self-confidence as a child, and I know it’s from that.”

She has aimed to provide the same type of support to Samuel, who was adopted from Ethiopia in November of 2010.

Samuel was breastfed by his new mother instantly. He is latched to her breast “maybe once a month”.

Jamie Lynne Grumet said: “Being able to give him that [comfort] with the trauma that he faced was really, really important to me. I didn’t realize how much it would help my attachment to him.

“When his English improved, because the connection was there, he didn’t do it as much.”

The mother has written on her blog, which has now been taken down, about how much Aram enjoys being breastfed.

In one post, a photograph of Aram in the Playboy Mansion has been uploaded.

The picture was captioned with the text: “I’ve breastfed Aram at the Playboy mansion. I actually felt it was the most appropriate place on earth to do it.”

There is no explanation to explain why she believes this.