Customs officials in South Korea have discovered thousands of pills filled with powdered human flesh coming from China, it was revealed today.

The Korea Customs Service said it had found almost 17,500 of the capsules being smuggled into the country from China since August 2011.

The powdered flesh, which officials said came from dead babies and foetuses, is reportedly thought by some to cure disease and boost stamina.

But officials said the capsules were full of bacteria and a health risk.

“It was confirmed those capsules contain materials harmful to the human body, such as super bacteria. We need to take tougher measures to protect public health,” a customs official was quoted as saying by the Korea Times. 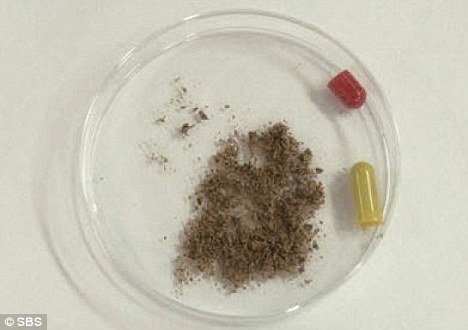 The powdered flesh, which officials said came from dead babies and foetuses, is reportedly thought by some to cure disease and boost stamina

The San Francisco Times reported that tests carried out on the pills confirmed they were made up of 99.7% human remains.

Inspections are to be stepped up on shipments of drugs arriving from north-east China, Yonhap news agency reported.

The Dong-a Ilbo newspaper said that capsules were being dyed or switched into boxes of other drugs in a bid to disguise them.

Some of the capsules were found in travelers’ luggage and some in the post, customs officials said.

Allegations that human flesh capsules were being trafficked from north-east China into South Korea emerged last year in a South Korean television documentary.

At the time China’s Health Ministry said it was investigating the claims raised by the programme.

Ministry spokesman Deng Haihua, quoted at the time in China Daily, said China had “strict management of disposal of infant and foetal remains as well as placentas”.

“Any practice that handles the remains as medical waste is strictly prohibited,” the newspaper quoted him as saying.