Violet D’Mello, a British tourist who tried to protect a girl being mauled by captive cheetahs, has told of how the animals then turned on her.

She and another family had entered the enclosure for a photo next to the cats when the child was attacked.

She stressed that the animals were not being “vicious” when they attacked her.

“It was, I think, a playful attack. I just remember something biting my head and dragging me down.

“But even then I was just thinking of the children [in the enclosure]. We were told they would never attack adults, it was the children we were concerned about.”

Earlier, Violet D’Mello told the Port Elizabeth Herald the incident was a “nightmare”.

She had intervened when one of the cheetahs grabbed the girl from the family.

“They weren’t being vicious,” she told the newspaper.

“You could tell they were just excited, but it became serious very quickly.

“It all happened so fast. After his sister was free, another boy tried to make a run for it.

“As I stopped him, something jumped me from behind.” 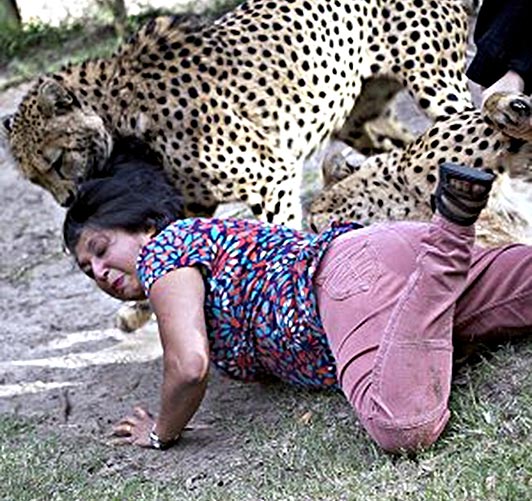 A park guide pulled the cheetah off but another cat then attacked the 60-year-old.

Other people on the scene managed to get both cats off and everyone escaped the enclosure.

Violet D’Mello suffered injuries to her head, stomach and legs during the incident, which happened during a holiday with her husband Archie.

She added: “Something inside me just said, <<Don’t move. Don’t move at all. Don’t react, just play dead>>.”

“This was meant to be a holiday, but it’s really turned into a nightmare.”

Violet D’Mello’s husband, Archie, took photos of her ordeal and he said the park’s guide seemed to be caught unawares by the attack.

“I was about five to 10 feet away. We didn’t expect anything to happen like this. I don’t think even the guide knew what to do. She didn’t have any weapons, or stick or Taser, until somebody from the outside gave us a stick and the guide used it on the cheetah’s head to release the hold on my wife.”

He also said his wife has “multiple bite injuries”.

He added: “She has had a lot of stitches to both her eyes. Her scalp itself was the worst because the tooth had penetrated between the skull and the scalp [which] was peeled backwards. She lost a lot of blood from the head. She had to spend the first 48 hours in bed.

“The worst bit was her left eye. There was a claw mark on it. Her eyelid was bruised and bleeding and completely closed up but [the tooth] hadn’t penetrated the eyelid.

“She was very lucky in that respect. No major arteries were damaged. The animals themselves seemed playful, they did a lot of damage.”

The enclosure at the park has been closed while the incident is investigated.

He said: “It’s not something we’ve ever really experienced. It’s obviously very unfortunate, and we’re looking into what may have startled or riled up the cheetahs.

“We’ve had these animals for four years, dozens of people have come through here and seen them and fallen in love with them, so it pains us to hear about something like this.

“From what we’ve been told, there was a lot of commotion at the scene, which, unfortunately, most likely aggravated them somewhat. We’re also considering the possibility that a female in heat in one of the neighboring enclosures might have played a role here, but we can’t be sure at this stage.”