According to an American survey, more than one third of U.S. citizens would fail the country’s citizenship test for immigrants.

The study, conducted by the Center for the Study of the American Dream at Xavier University, in Cincinnati, Ohio, found that one in three respondents would fail the civics portion of the test given to those applying for U.S. citizenship.

More than 1,000 Americans over the age of 18 were asked 10 random questions from the civics test, which asks about US history and government topics.

Of those questioned, 35% were unable to answer the pass mark of five correctly.

The most common questions people got wrong revolved around the different functions of government, and how power was distributed between the federal and state governments.

Seventy-five per cent of respondents didn’t know what the judicial branch does, while 71% could not name the U.S. constitution as the “law of the land”.

Furthermore, 57% could not define what an amendment was. 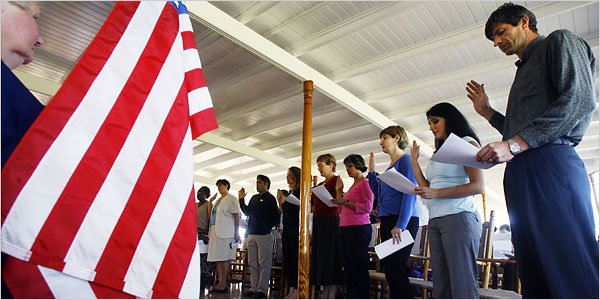 According to an American survey, more than one third of U.S. citizens would fail the country's citizenship test for immigrants

Most of those surveyed did the best on history and geography-related questions.

Despite this, another study found that 60% of Americans believe that being able to pass the government portion of the naturalization exam is a prerequisite for a high school diploma.

There are two parts to the citizenship exam, namely the English test and the civics test.

In the English test, an applicant’s ability to speak, read and write using the language are all assessed.

In the civics portion, the applicant is quizzed on US history and government topics.

According to U.S. News and World Report, 97% of immigrants applying for U.S. citizenship pass the test.

The House of Representatives has how many voting members?

We elect a President for how many years?

What is the name of the President of the United States now?

If the President can no longer serve, who becomes President?

What is the highest court in the United States?

What do we show loyalty to when we say the Pledge of Allegiance?

Who lived in America before the Europeans arrived?

When was the Declaration of Independence adopted?

There were 13 original states. Name three.

What territory did the United States buy from France in 1803?