Home Entertainment Lindsay Lohan as Elizabeth Taylor on the cover of Interview magazine in...

It appears that Lindsay Lohan has been rehearsing for her role as Elizabeth Taylor for years as a 2006 Interview magazine cover has surfaced showing her dressed just like the screen icon complete with a short dark hairdo.

Lindsay Lohan was just 19 when she posed for the June issue of Interview magazine.

The troubled star has been confirmed to play Elizabeth Taylor in lifetime movie Liz & Dick – based on the true story of Elizabeth’s tempestuous romance with actor Richard Burton.

Lindsay Lohan, 25, said earlier this week: “I have always admired and had enormous respect for Elizabeth Taylor. She was not only an incredible actress but an amazing woman as well.

“I am very honored to have been asked to play this role.” 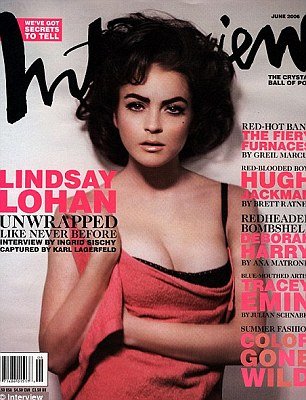 But not everyone supports the casting, with Rosie O’Donnell saying she doesn’t think Lindsay Lohan is “capable” of fulfilling her duties on set.

Lindsay Lohan hit back, saying: “It’s funny that someone you don’t know at all can say something so intrusive and so knowing.”

The star has this week been filming a guest spot on Glee, however sources say she turned up on set late yesterday after a night out.

She is taking on the role of judge at the Nationals show choir competition.

Lindsay Lohan also has a busy weekend planned – she is among a host of names to be asked to attend the event – which is held yearly to celebrate the work of journalists – including George Clooney, Josh Hutcherson and Charlize Theron which takes place on Saturday.

Lindsay Lohan is a guest of Fox’s Great Van Susteren and will be accompanied by her long-term lawyer Shawn Chapman Holley.

Kim Kardashian and her mother Kris Jenner are also guests of the Fox network.

Jimmy Kimmel will be providing the laughs as the comedian hosting the event, and he recently revealed he would be making jokes about the “glut of dumb things” said by people in the public eye.

Jimmy Kimmel said: “I will feast on stupid comments. There seems to be a glut of dumb things being said.”