Syrian activists say at least 70 people have been killed in an attack on a house in Hama.

They said several houses in the Mashaa at-Tayyar district in southern Hama were destroyed by a big explosion.

State media said 16 people died in the blast in a house used as a bomb factory by “armed terrorist groups”.

Meanwhile, a video has emerged which purportedly shows a man being buried alive by security forces, allegedly for sending material to TV stations.

The unnamed man, who is said to be a media activist, is seen pleading for his life as earth is shoveled over his head. He then goes silent.

The security forces are heard cursing him for receiving money for sending material to Arabic satellite TV stations. 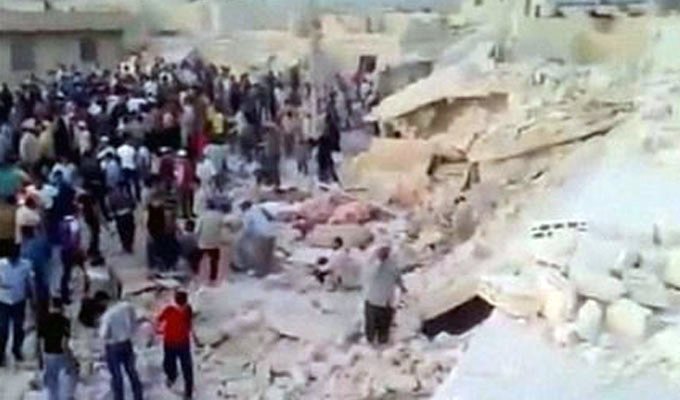 The video was leaked by sympathizers.

Following the blast in Hama, activists posted video on the internet showing a scene of devastation, with bodies being pulled from the rubble.

One report said 13 children and 15 women were among the dead.

They said the blast was caused by government shelling or even a Scud missile attack.

State television showed pictures of injured children in hospital and says that a group using the house to make bombs detonated them accidentally.

The reports cannot be independently verified owing to government restrictions on foreign media.

Continuing violence has been reported across Syria since a ceasefire was introduced earlier this month – including in towns where UN observers are present.

There are two observers currently stationed in Hama.

France now says the Security Council should consider the use of force in Syria if a UN-backed peace plan proposed by international envoy Kofi Annan fails to stop the violence.

The plan calls on Damascus to withdraw troops and heavy weapons from cities.

The UN has sent a small advance team of observers to Syria. Last weekend the Security Council approved the deployment of another 300.

The UN says about 9,000 people have died since pro-democracy protests began in March 2011. In February, the Syrian government put the death toll at 3,838 – 2,493 civilians and 1,345 security forces personnel.