Prime Minister Mark Rutte has presented his government’s resignation to Queen Beatrix of Neatherlands, paving the way for early elections.

Geert Wilders said he would not accept austerity demands to bring the budget deficit in line with EU rules.

His party was not part of the coalition but supported the minority government.

Dutch broadcaster Nos said Mark Rutte spent almost two hours on Monday afternoon at the queen’s palace in The Hague where he made the cabinet’s resignation official.

Speaking after a cabinet meeting in the morning involving Mark Rutte’s liberal VVD and the Christian Democrats (CDA), Finance Minister Jan Kees de Jager said they would “show the financial market and Dutch people that we can also put forward a solid financial policy”.

Since 5 March, the two coalition parties along with the Freedom Party have been trying to reach agreement on budget cuts. A recent forecast from the Netherlands’ Central Planning Bureau estimated that the country’s 2013 public deficit would raise to 4.7% of GDP, well above the 3% EU target. 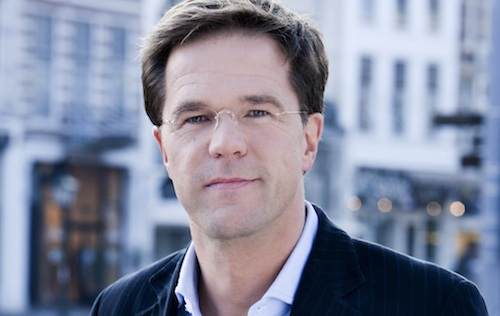 The Netherlands has been asked to submit its budget measures to the European Commission by 30 April, although it is not clear how firm that deadline is.

Geert Wilders said the coalition’s proposals would harm economic growth and affect many people’s spending power. Socialist Party leader Emile Roemer said he too was not prepared to support the attempt to bring the budget deficit below 3% by 2013.

But there are fears that the failure of the budget talks could harm the Netherlands’ prized AAA credit rating status and the low yield on government bonds.

If the Netherlands cannot balance its books without the government collapsing, then which government can; and where it leaves the EU fiscal compact, aimed at enforcing budget discipline.

Economic Affairs Minister and CDA leader Maxime Verhagen said on his Twitter feed earlier on Monday that the main concern was “how, on the way to elections, we can keep the economy and finances on the rails”.

Dutch daily NRC Handelsblad reported that confidence in the Netherlands had already fallen on the financial markets on Monday, with the gap widening between Dutch and German government bonds.

A parliamentary debate on the Dutch political crisis is expected to take place on Tuesday afternoon. A key question facing the political parties is whether to hold general elections before or after the summer recess.