A British team from Newcastle University is developing new technology aimed at helping older drivers stay on the road.

Many give up because their reaction times have slowed down – but this means they become more isolated and inactive.

One of the Intelligent Transport team’s developments is a “Granny-Nav” which identifies the safest route, such as avoiding right turns.

The Age UK charity said such developments could help the elderly maintain their independence.

The work is part of a £12 million ($19 million) “social inclusion through the digital economy (SiDE)” project, led by Newcastle University, which aims to see how technology can improve peoples’ lives.

The researchers have converted an electric car into a mobile laboratory.

It can monitor concentration, stress levels and driving habits via glasses that can track eye movement, and monitors to assess where the key stress points are for older drivers.

The car also has night vision systems to help driving in the dark.

Around 20 drivers in their 80s from across the north-east of England and Scotland have so far taken DriveLAB out on the road. 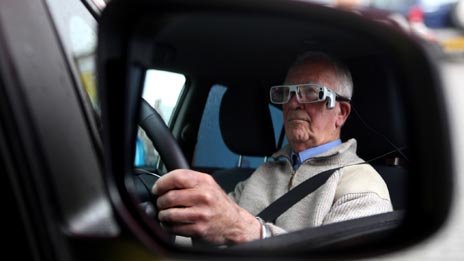 The team looked at developing a bespoke sat-nav because the elderly drivers they spoke to said finding a route they were comfortable with was a major factor in making them feel comfortable driving.

Many avoid turning right because they do not feel confident about judging the speed of oncoming traffic.

It also uses pictures of local landmarks, such as a post box or public house, as turning cues for when people are driving in unfamiliar places.

Phil Blythe, professor of intelligent transport systems at Newcastle University, said: “For many older people, particularly those living alone or in rural areas, driving is essential for maintaining their independence, giving them the freedom to get out and about without having to rely on others.

“And people base their whole lives around driving a car, having mobility.

“But we all have to accept that as we get older our reactions slow down and this often results in people avoiding any potentially challenging driving conditions and losing confidence in their driving skills. The result is that people stop driving before they really need to.

“What we are doing is to look at ways of keeping people driving safely for longer, which in turn boosts independence and keeps us socially connected.”

Dr. Amy Guo, who is leading the older driver study, said it had produced some surprises.

“For example, most of us would expect older drivers always go slower than everyone else but surprisingly, we found that in 30mph zones they struggled to keep at a constant speed and so were more likely to break the speed limit and be at risk of getting fined.

“We’re looking at the benefits of systems which control your speed as a way of preventing that.”

The team is also looking at displaying information on the windscreen, rather than the dashboard – so drivers do not feel the need to look away from the road – and systems that can detect if the car has strayed out of its lane.

Car manufactures have expressed interest in the work, and Prof. Phil Blythe said some of the technologies could be seen “soon”, with others within “five to 10 years”.

Michelle Mitchell, charity director general of Age UK, said: “Ability, not age, should determine how safe someone is on the road – so any research should look at all drivers and what makes them safe or unsafe.

“When it comes to driving, everyone is responsible, at whatever age, for making sure they are safe on the road.

“The emphasis should be on supporting older people to continue driving safely so that older people retain their ability to get out and about.”