Socialist Francois Hollande has won most votes in the first round of France’s presidential election, early estimates say.

Francois Hollande got 28.4% of votes, according to projections based on partial results, against 25.5% for centre-right incumbent Nicolas Sarkozy.

Nicolas Sarkozy and Francois Hollande will face each other in a second-round run-off on 6 May.

The election has been dominated by widespread anxiety over the French economy and the wider eurozone crisis. 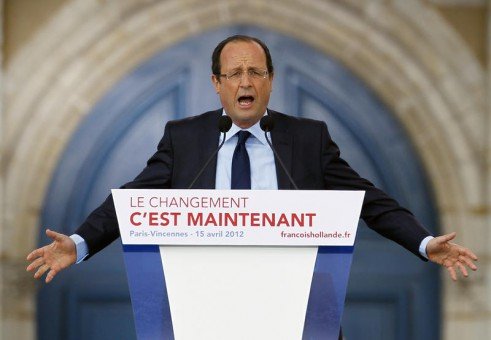 Socialist Francois Hollande has won most votes in the first round of France's presidential election, early estimates say

The estimates – based on votes counted in polling stations that closed early at 18:00 – were announced by French media when all voting ended at 20:00.

Nicolas Sarkozy – who has been in power since 2007 – was facing a total of nine candidates in Sunday’s first round.

Far-right leader Marine Le Pen came third with about 20% of the vote, and leftist candidate Jean-Luc Melanchon fourth with more than 11%.