TV series Glee returns on Fox today with new episodes, one of which just happens to be the big Whitney Houston tribute episode.

A couple duets to a quintessential Whitney Houston song, a new Glee Project contestant pops up, and frenemies come together in what looks to be a pretty intense musical number.

In “Saturday Night Glee-ver”, airing April 17, the Glee club will page homage to the movie Saturday Night Fever with disco-infused numbers. Plus, Glee Project runner-up Alex Newell makes his big debut. He has been described as “the love child of Kurt and Mercedes and will turn to them for much advice.” Jonathan Groff can’t be far behind, because Murphy revealed earlier this season that Alex and Groff would share “many scenes” together leaving up the big Nationals face off. 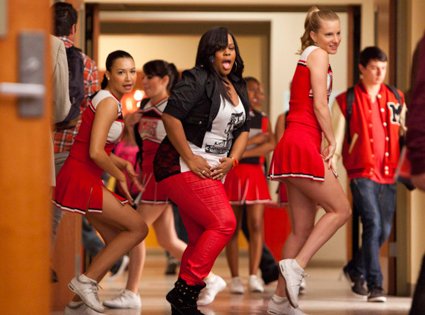 Glee returns on Fox with new episodes, one of which is Whitney Houston tribute episode

In the April 24 episode, titled “Dance With Somebody“, New Directions will pay tribute to the late great Whitney Houston by covering her chart-toppers. And it looks like Brittany (Heather Morris) and Santana (Naya Rivera) get the honor of performing the episode title song.