Home How To... How to improve your willpower

People’s willpower is obviously tested at Easter, when temptation comes in abundance and is often coated in chocolate, but a new book suggests that those who exercise greater self-control are those who have greater success in life.

He is sharply dressed, immaculately groomed and his calm, well-punctuated speech betrays a quiet confidence.

“You might think that people with really strong self-control struggle through this grim existence, forcing themselves constantly to do the right thing,” Roy Baumeister says.

“But that’s not correct. What it seems is that people with good self-control stay out of trouble and minimize problems.”

In his book Willpower: Rediscovering our greatest strength, co-written by journalist John Tierney, Roy Baumeister claims that willpower – the ability to control impulses and thoughts, and persevere with tasks – is a limited resource which is depleted every time we successfully resist temptation.

They could have one marshmallow immediately or two marshmallows in 15 minutes time. They were left alone with the treat and observed.

A small number of the children took the treat immediately, most held back for about three minutes but about one third of the children managed to wait the full 15 minutes. Those who waited longer for the marshmallow seemed to do better in school, scored higher in exams and were more likely to go on to university. They also tended to be healthier and more popular. 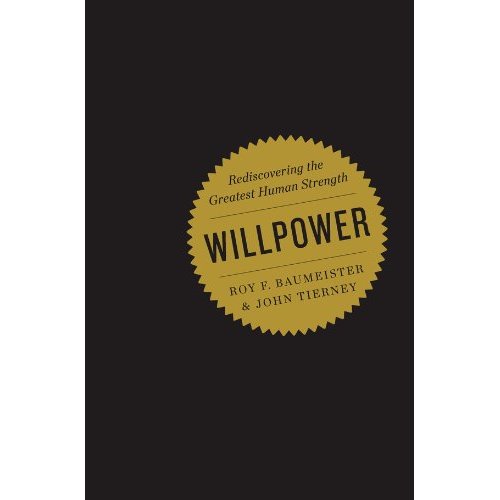 In his book Willpower. Rediscovering our greatest strength Roy Baumeister claims that willpower is a limited resource which is depleted every time we successfully resist temptation

Roy Baumeister subscribes heavily to this theory and goes further to try to define what exactly willpower is.

He believes willpower is a physiological resource. Like energy it is a limited reserve that is depleted as the day goes on. But it can be exercised to make it stronger, much like a muscle.

Roy Baumeister coined the phrase “ego depletion” to describe his theory and ran a series of experiments to prove it.

But just like any other muscle, Roy Baumeister says willpower can be improved through training.

“We have taken adults who are already socialized and with a couple of weeks of exercises, we have improved their will power and self-control.”

Roy Baumeister asked people who were right-handed to use their left hand for every day exercises like brushing their teeth, controlling a computer mouse eating or opening a door.

He tested their level of ego depletion by asking them solve a series of anagrams. Before and after the two-week exercise, those who did the exercises seemed to show a marked improvement in anagram-solving.

“To increase willpower, you need to override the automatic pilot and take charge with deliberate control.”

Getting people to sit up straight for two weeks, to speak only in full sentences or to avoid swearing seemed to have a similar effect. Roy Baumeister also found in other tests that willpower can be boosted by glucose. He called this “glucose resource theory”.

This has gained legitimacy among psychologists – glucose resource theory has been cited over 1,000 times in scientific papers. But it has also attracted some notable criticism.

“It’s almost like there is a self-fulfilling process here,” says Greg Walton, part of a team at Stanford University which has found evidence to debunk Roy Baumeister’s theory.

“The more that people believe that willpower is a limited physiological resource the easier it is to find ostensible evidence that that is the case.”

If Roy Baumeister’s resource theory is flawed, then what exactly is willpower? Michael Inzlicht, a psychologist at Toronto University argues for a more nuanced understanding of the processes behind self-control.

“It’s clear that consuming glucose can improve self-control,” he says.

“Glucose does seem to improve things, but this does not mean that glucose is the resource that underlies self-control.”

Michael Inzlicht believes glucose may have a psychological rather than a physical effect. But he doesn’t entirely disagree with Roy Baumeister’s muscle metaphor.

“I think willpower can be improved and exercising it seems like a promising way to do this,” he says.

Though he fully supports the theory of exercising to increase willpower, Michael Inzlicht believes Roy Baumeister’s assertions could be premature.

“This is promising, but more work is needed.”