Five suspected al-Qaeda militants believed to have planned the 9/11 terror attacks have been formally sent to trial by the United States.

The five Guantanamo Bay inmates, including alleged mastermind Khalid Sheikh Mohammed, will be tried by a military commission.

The suspects will face charges including terrorism, hijacking, conspiracy, murder and destruction of property.

They could face the death penalty if found guilty, the Pentagon confirmed.

Khalid Sheikh Mohammed and the four others – Waleed bin Attash, Ramzi Binalshibh, Ali Abd al-Aziz Ali and Mustafa Ahmad al-Hawsawi – are expected to be tried together, the Pentagon added.

They are accused of planning and executing the terror attacks of 11 September 2001, which saw hijacked planes strike New York, Washington and Shanksville, Pennsylvania.

The five suspects are to hear their charges read out before a military court within 30 days, and are expected to be asked to enter a plea.

The decision to refer the charges to a military commission comes after a lengthy legal wrangle over where the five men would face justice. 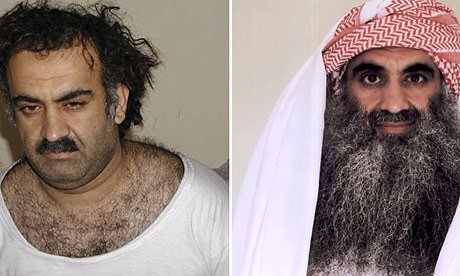 In 2009 the Obama administration tried to move their trial into US civilian courts, but reversed its decision in April 2011 after widespread opposition.

The five were eventually charged in June 2011 with offences similar to those they were accused of by the Bush administration.

But he was forced to abandon the closure plans as it became apparent that the issue of where to imprison and try al-Qaeda suspects had no easy resolution.

The Pentagon has previously said Khalid Sheikh Mohammed admitted he was responsible “from A to Z” for the 9/11 attacks.

In a previous court hearing he has said that he intended to plead guilty and would welcome martyrdom.

Khalid Sheikh Mohammed was captured in Pakistan in March 2003 and has been detained at Guantanamo Bay since 2006.

US prosecutors allege that Khalid Sheikh Mohammed was involved with a host of other terrorist activities.

These include the 2002 nightclub bombing in Bali, Indonesia, the 1993 World Trade Center bombing, the murder of American journalist Daniel Pearl and a failed 2001 attempt to blow up an airliner using a shoe bomb.

Khalid Sheikh Mohammed has alleged that he was repeatedly tortured during his detention in Cuba. CIA documents confirm that he was subjected to simulated drowning, known as waterboarding, 183 times.