Millions of people from Dallas and Forth Worth are being urged to seek shelter immediately as dramatic news footage shows trucks and other massive debris being thrown across the skies in Texas.

Incredible news footage of the twister shows a massive funnel cloud and tractor trailers being launched above the area.

The weather service says the tornado south of Fort Worth caused “considerable damage” near Cleburne.

The agency said in its warning: “National Weather Service meteorologists confirmed a large and dangerous tornado near Hutchins. This is a dangerous situation … seek shelter now!! This is a tornado emergency for Dallas and Hutchins!” 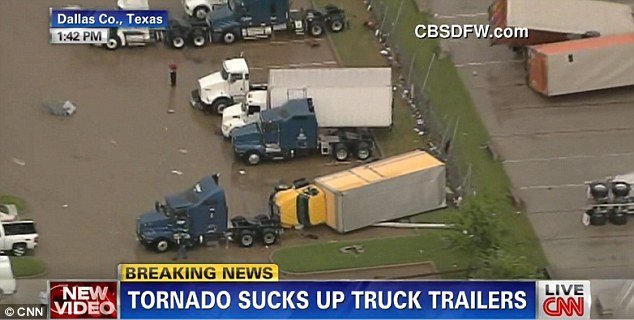 Local television footage shows a large funnel cloud on the ground near Interstate 35 south of Dallas.

The weather service says the “large and extremely dangerous” tornado was near Lancaster about 20 miles south of Dallas and moving north.

The weather service is also reporting other developing tornadoes as a band of severe storms moves through the area.

A tornado watch is in effect for most of the counties in north Texas.