A number of items once belonging to Whitney Houston commanded slightly more than $82,000 at the Hollywood Legends auction this weekend, with most items drawing much higher bids than they were originally estimated to bring in.

The highest-selling Whitney Houston item, a beaded bustier that had been sold during a 2007 court-ordered debt auction, drew $18,750. In the catalog for the auction, the estimated value is listed as $4,000 to $6,000.

Also commanding a handsome price, a grey velvet gown that Whitney Houston wore to her mentor Clive Davis’ pre-Grammys party in 1996. The gown, which was also sold during Whitney Houston’s 2007 debt auction, pulled in $11,520, and had been listed in the catalog in the $1,000-$2,000 range. 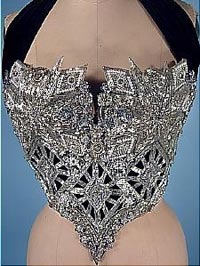 The highest-selling Whitney Houston item, a beaded bustier that had been sold during a 2007 court-ordered debt auction, drew $18,750

The items were sold off as part of the Hollywood Legends auction held in Beverly Hills by Julien’s Auctions. Other items up for bid included a bowler hat, cane and suit owned by film icon Charlie Chaplin and a Christian Dior gown worn by Grace Kelly.

A vest and two pairs of earrings worn by Whitney Houston in her breakthrough film The Bodyguard were also auctioned off, raking in a combined $8,700.

Whitney Houston was pronounced dead on February 11 after being found submerged in the bathtub in her room at the Beverly Hilton hotel by a member of her personal staff. An autopsy later determined that she died of accidental drowning, and that cocaine and heart disease contributed to her death.