At least five people are believed to have been injured in a shooting at a Christian university in Oakland, California, police say.

US TV footage showed wounded people emerging from buildings at Oikos University in the city of Oakland.

Policemen have surrounded the buildings, but it is not clear whether there is still a suspect on the scene.

Oikos University is a religious institution offering courses in theology, music and nursing, according to its website. 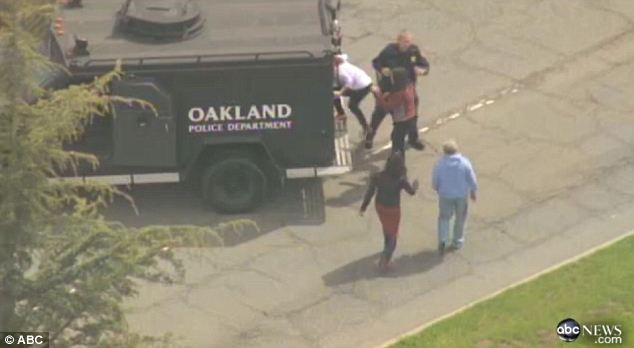 At least five people are believed to have been injured in a shooting at Oikos University in Oakland, California

Johnna Watson, of Oakland Police, said: “We know this to be a Korean college. A gunman came in to the college and fired multiple shots.

“We do have fatalities, I cannot confirm the number of fatalities we have at this time. We additionally have victims who have suffered from gunshot wounds.”

Johnna Watson added that medical services as well as police were at the scene.

The Oakland Fire Department says it was first notified of the shooting at about 10:50 local time .

One witness, Brian Snow, told local news station KGO-TV: “One of the people who was inside the building, she was saying there is a crazy guy inside.

A police officer at the scene told reporters the gunman had not been identified.

Reports described the suspect as a Korean man in his 40s, with heavy build and wearing khaki clothes.