An Australian mother on board a Qantas flight discovered live maggots crawling inside a packet of the airline nuts after she’d already begun eating them.

Victoria Cleven, 42, didn’t see the maggots when she started to eat the snack on a Los Angeles to Melbourne flight because she hadn’t turned on her overhead light.

But after thinking the nuts tasted a bit strange she turned the light on to inspect the packet and saw maggots wriggling out of the packet all over her.

The mother-of-two told Melbourne’s Herald Sun newspaper: “It tasted strange and I turned the light on and looked at the rest of the packet and started seeing maggots coming out of it everywhere.

“I couldn’t talk. I was nearly throwing up. I was beside myself.” 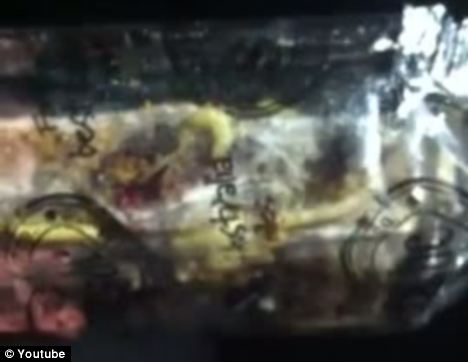 Victoria Cleven’s 15-year-old son then checked another two packets of the Australian made “trail mix” they had got on the plane and found they contained maggots as well.

She took a photo and video of the maggots to prove her story and now says she is unhappy with Qantas’ response.

Victoria Cleven says she was offered a flight refund but claims the money she was offered eventually amounted to AUD$400 when the total cost of her flight was AUD$1,600.

A spokesman for the airline says the incident last week is being investigated.

He added: “Qantas sincerely apologizes to Mrs. Cleven for the incident that occurred on her return flight from LAX to Melbourne.

“Qantas has also contacted the supplier and is currently investigating how this issue occurred.”

The Sydney Biscuit Company, which makes the snack, told the newspaper that moths could have got into the packets when they were stored at a warehouse.