Health guru Jennifer Nicole Lee, who has built a career around her incredibly toned body which has inspired people around the world to get fit and shed weight, has revealed her personal weight loss journey was anything but easy.

Jennifer Nicole Lee, 36, a mother-of-two, had tipped 200 lbs on the scales after the birth of her second child. Shown here in the midst of her hard work, she dropped more than 70 lbs to become the image of health she is today.

The weight loss champion told Foxnews.com that she had to “let go of wanting my weight loss success to happen overnight”.

Jennifer Nicole Lee said: “I banished all the myths and got real with myself… all the excuses such as <<I don’t have enough time>> or <<it’s expensive to live healthy>>.

“I also had a hard time giving myself the gift of time as I wanted to see the results instantly.” 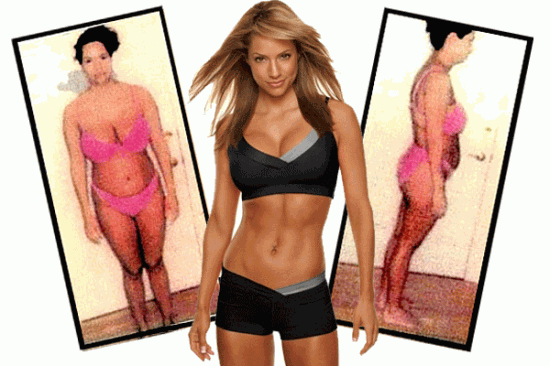 Jennifer Nicole Lee, who has appeared on the cover of more than 40 magazines, had been fed up with being out of shape especially once she had two children to care for.

She said: “Being a new mom really hit me hard… I was sick and tired of being fat with little to no energy.

“I made a commitment to learn everything possible about how super fitness models and serious athletes ate and trained.”

Now known as a fitness guru after publishing several books, releasing a swimwear line as well as workout DVDs, Jennifer Nicole Lee learned to focus on persistence rather than looking perfect.

It landed her a spot on Oprah where she encouraged other mothers to take her lead.

Jennifer Nicole Lee said: “We, as moms, suffer from wanting the best for everyone but we must aim to put ourselves back on our to-do list.”

During the early stages of her weight loss, Jennifer Nicole Lee put a large emphasis on building strength as opposed to shedding fat, telling Fox: “Women, especially moms, must rate their health level on how strong they are mentally, emotionally and physically.

“Being fit does not equal a size or being thin. But being strong means you are healthy and fit.”

Jennifer Nicole Lee said it is common for women to set themselves weight loss goals without actually following through. Her training method, which has been titled JNL Fusion, focuses on “doable” workout techniques.

She trains her clients to do “six circuits of three sets of 30-second strength moves followed directly by 30-seconds of a body weighted cardio blast”.

It forces the metabolism to race up and down intensely, which helps to burn fat.

Jennifer Nicole Lee said: “I urge women to do more strength training than cardio as lean muscle tone is the fountain of youth.”