The fossilized bones of a foot that were discovered in Ethiopia and dated to be 3.4 million years old gave scientists a fascinating new insight into the evolution of humans and our ability to walk.

The researchers say they do not have enough remains to identify the species of hominin, or human ancestor, from which the right foot came.

But they tell Nature journal that just the shape of the bones shows the creature could walk upright at times.

The fossil haul consists of eight elements from the forefoot – bones such as metatarsals and phalanges.

The specimens were pulled from clay sediments at Burtele in the central Afar region of Ethiopia, about 520 km north-east of the capital Addis Ababa.

It is a significant discovery because it demonstrates there was more than one pre-human species living in East Africa between three and four million years ago, each with its own method of moving around.

The other creature was the famous “Lucy” animal (Australopithecus afarensis), whose remains were first identified in the Afar in the 1970’s.

Lucy’s body was built for walking. Her big toe was aligned with the other four digits of the foot, and she had a human-like arch that allowed for very efficient locomotion.

The owner of the partial foot from Burtele was not afarensis; that can be said definitively.

The fossils indicate it had no arch and the big toe was opposed to the other digits, enabling the animal to grasp branches in a tree.

But the fact this creature could and would walk on the ground is evidenced by the nature of the bone joints. These were arranged such that the foot could push off, or toe-off – something only humans do as they walk, and something flat-footed apes cannot achieve. 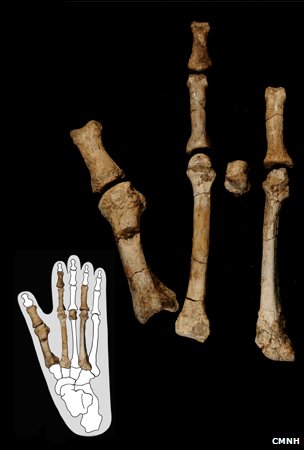 The fossilized bones of a foot were discovered in Ethiopia and dated to be 3.4 million years

“If you look at the lateral metatarsal head along with the proximal toe bone, the phalanx – that particular joint is really unique in hominids,” explained team member Dr. Bruce Latimer of Case Western Reserve University, US.

“You can see it’s a very different kind of a joint, because when you toe-off and push forward in that last phase of walking, your toes are highly flexed. In order to achieve that, you have to change the base of the phalanx and the metatarsal head – you have to change both sides of the joint. And it’s a highly characteristic type of change that we can pick out immediately,” he said.

The scientists can only speculate as to identity of the Burtele species. Without skull and teeth elements, a formal classification is impossible.

The team says the animal’s morphology is reminiscent in some respects to a 4.4 million-year-old creature known as Ardipithecus ramidus. Although, again, it is not ramidus.

“It may be a relic species that was lingering around until 3.4 or 3.3 million years ago, and which had its origins way back in Ardipithecus ramidus times,” suggested team leader Dr. Yohannes Haile-Selassie.

“But obviously we cannot put it into the Ardipithecus genus or call it a ramidus species because we do not have any craniodental elements associated with this foot.

“We’ve kept digging at the Burtele site; we have a few isolated teeth, but that’s all,” the Cleveland Museum of Natural History curator said.

It is, though, a remarkable thought that there were these two very distinct species effectively rubbing shoulders with each other 3.4 million years ago in what is now Ethiopia.

The landmark Lucy specimen unearthed in 1974 was found at Hadar, about 50 km from Burtele. Other remains of afarensis have been discovered closer still.