Charla Nash, the woman who lost her eyesight, lips, nose and hands in a vicious chimp attack, says she feels at home in her new skin two years after her face transplant.

Charla Nash, 58, who nearly died in the horrific mauling, told the Hartford Courant exclusively that she feels no different than she did before the attack.

“I just feel like it’s my face,” Charla Nash said.

Charla Nash, a single mother from Stamford, Connecticut, told the Hartford Courant that she’s regaining movements in her face and can express herself with various motions.

“Every day, my muscles get better,” she said.

Sandra Herold, Charla Nash’s friend and owner of the 200-lb chimp Travis, died of an aneurism in 2010. Charla Nash said that if she could say anything to her former boss and friend, she would say: “Sorry that all this happened. And, nothing we can change now.”

However, Charla Nash added that Sandra Herold was “a trouble person” that was more worried about her pet – who was shot and killed after the attack – than she was of her. 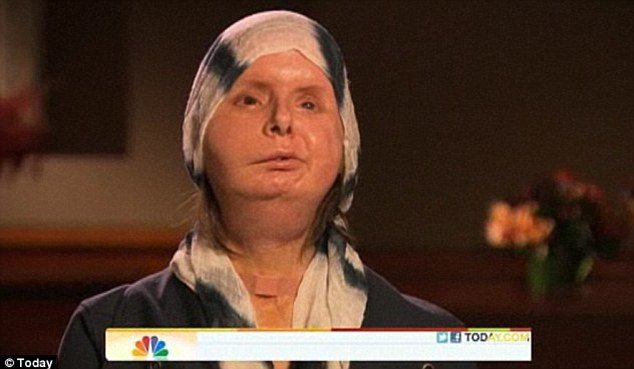 In past interviews, Charla Nash revealed that having a new face allowed her simple human pleasures – she has regained her sense of smell and can eat again.

Charla Nash is even regaining sensation in her forehead, cheeks, eyebrow, and nose.

But most of all, she’s learning how to smile.

“It creases up here,” she told the Hartford Courant as she pointed at her mouth.

In the interview, Charla Nash also spoke of long years of rehabilitation, and the hope of regaining some semblance of independence.

“I don’t know what the future’s doing (sic) to bring… so I don’t get my hopes up,” she said. Though she added that she wants to progress far enough that she can again ride horses and live in her own house.

Charla Nash said she misses simple things – like being able to bargain hunt, bask in the sunshine, or even look at her 20-year-old daughter, Brianna.

“I have to depend on a lot of help,” Charla Nash she said.

“My life depends on really not being alone. I used to be very independent.”

Charla Nash also gets phantom pains in her hands, despite the fact that they were removed after the 2009 attack.

Transplants added in surgery later had to be removed because of dangerous complications.

In an interview with ABC 7 last month, Charla Nash – who likes being called Charlie – said she doesn’t want anybody’s pity.

“I don’t want anyone to feel sorry for me,” Charla Nash said.

There are very real financial concerns as well. Her surgery, care, and rehabilitation have cost millions.

According to the Hartford Courant, there is a $150 million case pending against the state of Connecticut for allegedly not protecting its citizens from an unsafe creature.

One state employee reportedly wrote in a memo that Travis’ attack was “an accident waiting to happen”.

“I hope that I do get my day in court,” Charla Nash said.

She has been told by doctors that she needs to work on bulking up, as she is still quite thin for her 5ft 10in frame.

Charla Nash, who was blinded in the 2009 attack, was fitted with brown glass eyes and hopes to get a double hand transplant after the first one failed.

She received a revolutionary full-face transplant at Brigham and Women’s Hospital in Boston nearly two years after the attack.

The operation – performed by a team of more than 30 surgeons and nurses – and subsequent recovery were widely covered.

Prior to the surgery, Charla Nash hid her face under a veil, saying that she chose to wear it “so I don’t scare people”.