Reality star Kim Kardashian was attacked with flour on the red carpet at her own perfume launch in West Hollywood.

Kim Kardashian, 31, was covered in flour after an unidentified Asian woman pelted her at the launch of True Reflection at The London Hotel in West Hollywood.

The reality star arrived dressed-to-the-nines, wearing a black blazer, leather trousers and a bright blue blouse, but within minutes she looked more like a dowdy housewife after a kitchen mishap.

Kim Kardashian’s whole back and shiny hair was covered in the substance, which was later determined as cooking flour, according to TMZ.

TMZ reports that after the attack, Kim Kardashian, who arrived at the hotel with her mother Kris Jenner, was ushered into a private room where she removed her doused jacket and brushed the flour off the rest of her outfit and long brunette locks.

Kim Kardashian opted to go back to the event following the fracas, and the assailant was arrested by police who were called to the scene, according to TMZ.

The fire department was also called to the scene to inspect the substance, which after several minutes they determined as cooking flour. 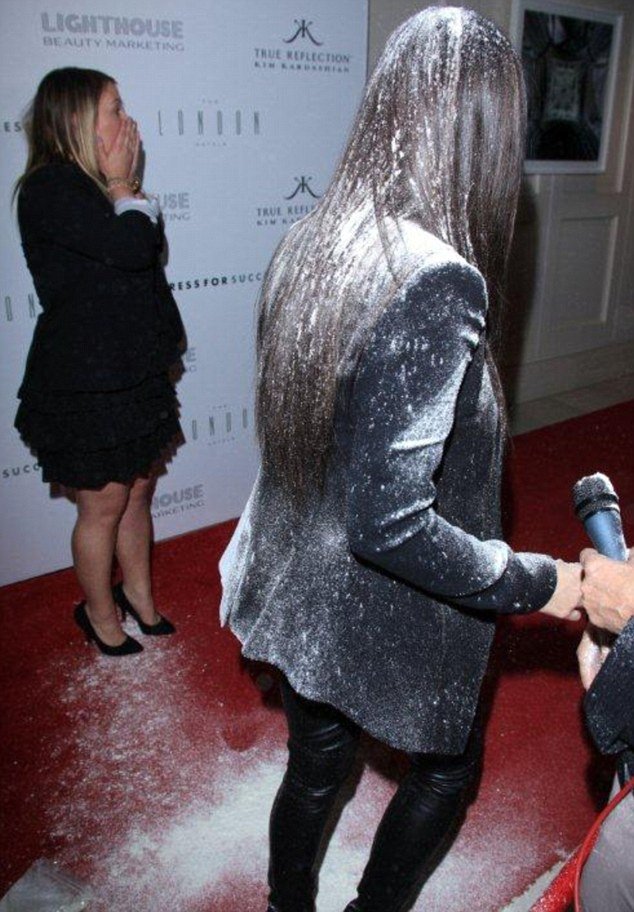 After Kim Kardashian returned to the event she laughed off the ordeal and even made a joke in light of the incident.

“That probably is the craziest, unexpected, weird thing that ever happened to me,” Kim Kardashian told E! Online.

“Like I said to my makeup artist, I wanted more powder and that’s a whole lot of translucent powder right there.”

Meanwhile her mother Kris Jenner told the website: “If anybody comes at me with something, call security.”

According to E! Online, the woman ran off after she threw the flour, but didn’t get very far when Kim Kardashian’s representation intercepted her and held onto her before security took over.

Kim Kardashian has not pressed charges over the incident and the unidentified woman has been released, according to a press release from the Los Angeles County Sheriff’s Department.

Moments before the assailant launched their attack, Kim Kardashian was blissfully unaware of what was to come, happily posing for pictures and doing interviews with the press.

The attack may have quite possibly have come from a protester opposing Kim Kardashian’s love affair with fur.

In November 2011, Kim Kardashian was the target of a PETA campaign.

The animal rights group posted a billboard in Los Angeles that featured a photo of the curvy star wearing a fur-trimmed jacket.

A picture of two foxes was included, along with the caption: “Kim: These babies miss their mother. Is she on your back?”

The attack comes just a few months after somebody flour bombed Kim Kardashian’s best friend Jonathan Cheban in New York City while he was walking with the reality star near her boutique Dash last December.

The unidentified person threw the flour in Jonathan Cheban’s face yelling: “This is for Kris Humphries!”

“I think it’s pathetic that someone would go to this length to show their support for someone,” Jonathan Cheban told Us Weekly following the ordeal.

Kris Humphries representation also released a statement at the time, denying that he had any involvement.

“[He] would never condone hateful and unacceptable behavior like that to anyone, in any situation,” the statement said.

Kim Kardashian’s little sister Khloe immediately took to her Twitter account to express both her outrage and praise for her sister’s dignified reaction after the flour pelting.

Kim Kardashian’ sister then later added in defense: “I wish I was with my sister tonight. I bet you that woman wouldn’t have dared tried a thing…”